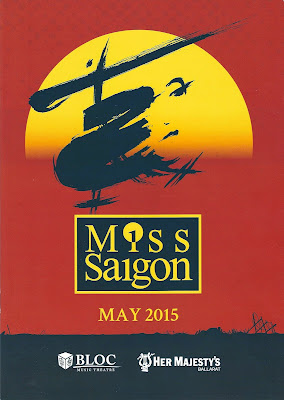 The annual Ballarat Heritage Festival weekend chose a war commemoration theme this year and local theatre company, BLOC Theatre, presented the Vietnam war musical, ‘Miss Saigon’ as their contribution.  It proved to be an excellent choice as well as an excellent production.

Staged in the beautiful 140 years old Her Majesty’s Theatre, the show is a challenge for any company, requiring very strong singers, a fine orchestra able to tackle the difficult score, realistic acting and a director able to pull it all together.  If that’s not enough to deal with, there’s also the audience expectation of a spectacular helicopter landing on stage in the second act.  Luckily, director Stephen O’Neil showed that he is more than equal to the task.

Musical and Choral Director, Gareth Grainger, achieved very high quality with both singers and orchestra.  Everyone in the large cast gave realistic characterisations and the principles had no problems with the vocal demands of the score.  As Kim, Vanessa Belsar sang beautifully and was heart-breaking and believable in the role of the ill-fated Vietnamese girl.  Andrew McCalman as her American lover, Chris, was outstanding in a vocally assured, heart-felt performance.  Jodie Toering shone in the smaller role of Gigi and Brendan Smart gave a warm performance as Chris’s friend, John, as well as a show-stopping rendition of ‘Bui Doi’ at the start of the second act.

Emma Rix, as Ellen, sang well but lacked warmth in her characterisation.  It’s important not to lose audience sympathy in this role by displaying too much angry determination to keep her husband.  Keith McNamara in the difficult role of Thuy was strongly militaristic but needed more variation in his performance to show the human side of the man.  Steve Armati gave a winning and very physical performance as the wily Engineer.  His singing of ‘The American Dream’ was superb.

The set, designed by Nathan Weyers, was spectacular in its detail and, with the excellent lighting of Scott Snowden, gave the show a realistic atmosphere.  The helicopter landing sequence was the most exciting one of all of the productions of this show that I’ve seen.  It looked frighteningly real and the sound design of that moment by Greg Ginger was very well done.  Her Majesty’s Theatre in Ballarat is renowned for its good acoustics but I was not expecting a sound as clear and balanced as this.  Sound operator, Peter Thwaites, deserves special mention for his work during the performance.  Costumes designed by Melanie Buckingham were correctly in period and added to the overall realism of this show.

Director, Stephen O’Neil, has done excellent work with this production.  Some productions of this show confuse audiences with the three year time changes but this was not a problem here.  In addition, there were many welcome original touches by the director.  This was an emotionally draining but highly enjoyable show that the whole company can be proud of.
Posted by Canberra Critics Circle at 11:35 AM