The Arts and the Common Good by Katharine Brisbane 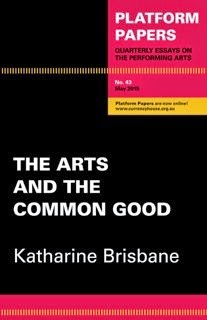 The Arts and the Common Good by Katharine Brisbane.  Platform Papers No 43: Currency House, Sydney, May 2015.

In 1967, when Katharine Brisbane first came to my notice as the new ‘national theatre critic’ for The Australian, the upstart and still quite radical Rupert Murdoch newspaper, I fitted exactly one description she gives of theatre activities of the day.  I was an educated and sort of semi-professional amateur as a teacher doing as much drama as I could, extra-curricular with school students as well as in the local community theatre groups (Broken Hill Repertory and the Wyong Drama Group in my case).  Coming to Canberra gave me the opportunity to join the new school system in 1974, fortunately at the time of the Whitlam Government’s enthusiasm and even relative largesse towards education, where I was able to turn my drama interest into a professional career, writing curriculum and teaching the new subject called ‘Drama’ for the next two decades.

Brisbane also notes that development, and the importance of drama in education, in her detailed history of theatre in Australia and its relationship with ‘the common good’.  From a highly perceptive study, especially of the role of government, commercial interests and social movements, and drawing on some 60 references from the likes of Vance Palmer, to Donald Horne, and on to Robyn Nevin and Wesley Enoch, Brisbane reaches highly practicable conclusions, not just about where we stand today but what we might do tomorrow.

And I mean preferably tomorrow, rather than in some indefinite future.  After all just today, as the Reserve Bank has reduced the official cash rate to ‘a new record low of 2 per cent’, ‘Treasurer Joe Hockey has urged Australian households and businesses to borrow and invest money’ (to quote The Canberra Times).

So let’s pick up Brisbane’s six proposals in her section 7. So what is the matter with profit?, for this is the key question that her history raises about amateurism, popular commercialism, high art’s non-profitalism, and issues like excellence-ism, elitism and community-access-ism.

She begins with the playwright Alan Seymour’s question about the Parade Theatre: “'Why isn’t it a metropolitan theatre?', he asked, 'and the [NIDA] students apprentices?'”  Here Brisbane is concerned about the ‘edifice complex’, noting that “The Parade Theatre, seating 700, has been under-used since it opened and is too impractical and expensive for hiring use.”  Rather than, I assumes she means, as nothing but a non-profit training venue for the students.

I had a similar problem with Murranji Theatre where I taught at Hawker Secondary College.  I had visions of it being used as a significant place for theatre in Canberra, as well as for experiential learning for my students, but it rarely attracts commercially viable theatre (though it has been a successful venue for community users), despite its excellent acoustics and quite sensible proscenium stage.   But backstage facilities were always limited by the theatre being built within a school structure.  Erindale College Theatre was rather more successful because it was originally designed to operate as a community facility more or less independent of the school.  The venue which has made the grade has been The Street Theatre, which finally got a decent extension just in the last year or so, and is on the boundary between the University and the Civic Centre – while the ANU’s Arts Centre has had mixed success, being fully within the Universiy.

1.     A real industry.  I believe that we have the potential for a profit-based performance industry of the highest quality.

2.     National development. I believe that we need a national theatre workshop dedicated to developing an Australian performance tradition and working with playwrights to bring the text, performance and design to its optimum before public performance.

3.     Rethought venues. I believe that it is now time for our performing arts centres to become metropolitan theatres open for hire.

4.     Refocussed Australia Council. I believe that the Australia Council should be redrafted to invest their money in talent, employment, assisting individual artists, funding innovation and advancing the interests of cultural continuity and self-examination. Supporting the national workshop would be one of its responsibilities.

5.     Cultural leadership. I believe that our major artists should take their place at the head of the profession as advocates and spokesmen and women; should actively promote their industry’s practice and social value; and be retained by and identified with their particular arts organisation or company not through occasional appearances but for a year at a time.

6.     Outside funding. I believe that the Australian performing arts have more than enough talent and vision to attract their second-step development venture capital and the ethical investment sector.

As you can see, there’s a lot more to the Platform Paper than I can cover here, except to say that all six proposals are clearly derived from Katharine Brisbane’s long experience.  She also refers to previous Platform Paper writers Julian Meyrick and Wesley Enoch, whose papers are also reviewed on this blog (May 16 and Aug 9, 2014 respectively).  From so much that I could cover, I will extract an idea which I also drew from those papers which relate to Brisbane’s proposals 2, 3 and 4.

We once hosted the Australian National Playwrights’ Conference each year in Canberra (which I recall fondly since a play of mine was workshopped there in 1981).  Katharine Brisbane was a key organiser in establishing the Playwrights’ Conference.  The role she suggests for the Australia Council suggests to me that Canberra should become the place for the National Performing Arts Development Program (2 above) invested in by the refocussed Australia Council (4 above) and conducted in the Canberra Theatre Centre - or Australian National Theatre Centre (3 above).

Elsewhere in her Paper, Brisbane sees the National Development Program as the place for apprentices to be trained on new writing, and their work to be performed on a profit-making basis, on an off-Broadway model (or something like the UK provinces or  off-West End model).  She specifically sees that this needs to happen away from the main capital city commercial theatre centres.  I see Canberra as the perfect place, at least for the rest of this century.

In effect Canberra has been playing the role of stimulating the development of young writers and performers over the 40 years I have worked here – for them to move off to the bigger centres.  As just a couple of examples among many, think of Iain Sinclair and Tommy Murphy in recent times and the work of Carol Woodrow (including at the Playwrights’ Conference) in times past.  Caroline Stacey’s work at The Street Theatre is already a great model to work from.

With investment not only from governments (ACT and Australian) but through industry partnerships (think Film Australia as another useful model) Canberra can play its proper role as the Australian capital of new Australian theatre.