LE NOIR - THE DARK SIDE OF CIRQUE 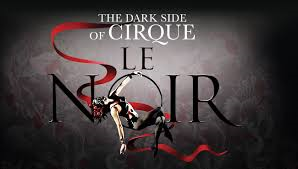 Le Noir – The Dark Side of Cirque


The advent of Cirque du Soleil in the 1980's changed the perception of circus forever.  No longer were audiences satisfied with traditional circus, and new tradition of circus emerged, based on spectacle and extreme physical skills.  Among the variations is the highly sophisticated cabaret cirque designed for presentation in theatres or spiegletents.  “Le Noir – The Dark Side of Cirque” is a superb example of this new breed circus.


For “Le Noir” the Canberra Theatre has been transformed, allowing a 360 degree view of the acts. The more adventurous members of the audiences are seated on the stage, around the perimeter of the raised circular performance area, in either tiered seating or at black cloth-covered tables. Those not on-stage are seated more conventionally in the auditorium.


A warm-up by the genial Master of Ceremonies, Salvador Salangsang Jnr, involving some gentle audience participation, makes a surprisingly low-key start to proceedings. However, when a white circular curtain drops suddenly from the ceiling, and then, following a couple of minutes of teasing light show, rises to reveal the whole cast posed in an assortment of sexy glittering white costumes, the theatre erupts. 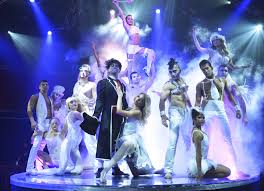 Glamorous showgirls pose, pout and strut the stage, amid ripped acrobats, floating butterfly kites, revolving search lights, sparkling flitter-flutter and pounding music, before attention is directed high above the heads of the audience where, clad in a jewel-encrusted body-suit, Elena Gatilova is posed suspended in a small silver hoop. Incredibly lithe, Gatilova proceeds to perform a series of seemingly impossible manoeuvres with the grace of a prima ballerina.  It’s the act which sets the bar for what is to follow.

All the acts are world-class, and impeccably presented. Predictably, “Le Noir” director, Mathieu LaPlante, claims that they are the best of their type in the world. Watching David Matz’ masterful performance on the Cyr wheel, or the incredible skill and strength of Anna Ostapenko’s hand-balancing act, or the heart-stopping stunts of Daria Shelest and Vadym Pankevych flying overhead on silks, it’s hard to dispute that claim.

A dancer in a streaming red silk dress heralds a dramatic mood change, and another spectacular tableau, this time with everyone costumed in red for a heart-stopping routine performed on trapeze by Marie-Christine Fournier and Louis-David Simoneau. A graceful display of raw male strength from strong-men, Valeri Tsvetkov and Yani Stoyanov  elicit gasps from the audience. 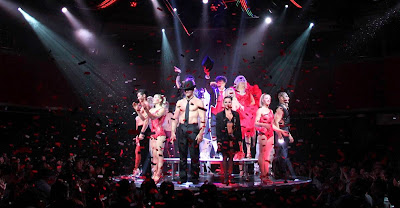 When the show resumes after interval, all the performers wear black costumes. Valerii Volynets and his diminutive partner Yuliia Lytvynchuk skilfully combine dance and acrobatics to perform a sensual pas de deux.
﻿﻿

﻿﻿
Denis Ignatov-Radokhov makes spectacular use of light for his dazzling shape spinning routine, and an act which has Gediminas Pavlovicius balancing precariously on rolla bollas high above the audience on an impressive piece of stage machinery, lead to the thrilling finale in which roller skaters, Jeronimo Ernesto Garcia Medina and Jessica Anne Ritchie, perform at break-neck speed on a tiny table.


The use of an over-arching white, red and black design scheme justifies the enticing subtitle “The Dark Side of Cirque”, and the quality of the individual acts is impressive. But it‘s the presentation of these acts which makes “Le Noir” something special. The addition of stylish showgirls, clever costumes to highlight the spectacular physiques of the performers, the tightly choreographed production numbers, as well as the involvement of the other performers to add drama, polish and spectacle to individual acts, along with excellent music choices, sets “Le Noir” apart from similar shows in delivering an exciting and satisfying evening of high quality physical theatre.