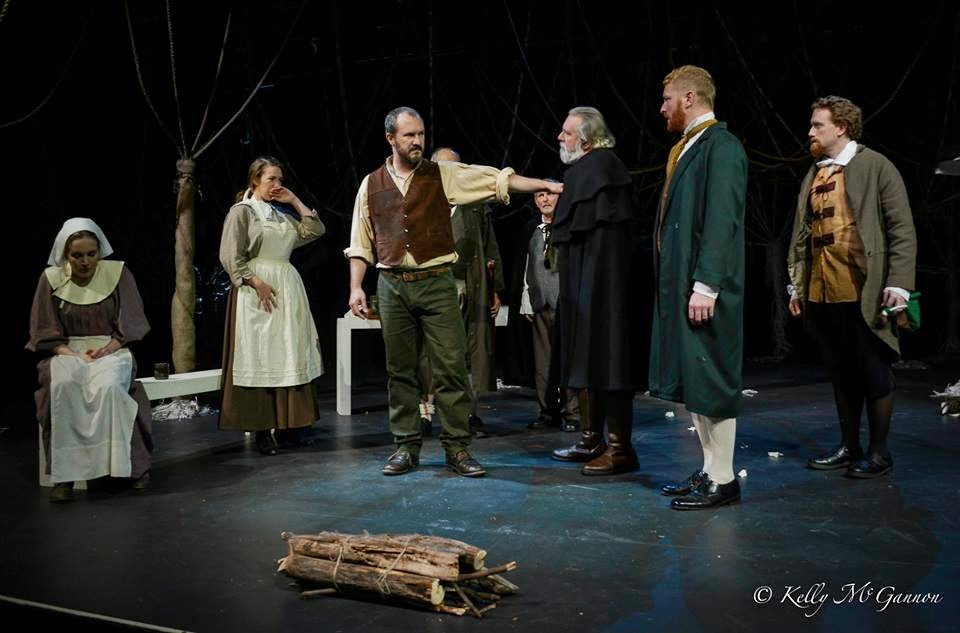 It could almost be a snapshot of a rave: women gathered in a circle, breathing a chant while their companion chugs down a mysterious liquid.  With the drink conquered, the women triumphantly explode into a wild dance (with just a hint of nudity).  It would be an ordinary scene at a revel for Bacchus or at the right kind of modern dance party, but these are Puritan women in a small 17th century American community, and this is extremely un-Puritan behaviour.  Unfortunately the women are caught in the act by the town’s preacher Parris (Adam Salter) - a man defined by both fire and brimstone orations and snivelling careerism.  In panic for both the souls of the girls and how it will look that this sort of thing is going on in his flock, Parris calls in an expert witchfinder, the affable but ruthlessly zealous Hale (Duncan Driver).  It transpires that the surest way to protect yourself when accused of witchcraft is to accuse someone else of witchcraft, and so the women start to suggest names - and the famous witch trials of Salem are called into session.

The nightmare that follows is banal.  The entire community has collapsed into murder and paranoia, but it has broken along the everyday fault lines of a small town.  The early victims are nuisances and disreputable types, the sort whose innocence it is convenient for the town to ignore.  But the accusations do not stop, and before long even decent folk face the rope, now over petty trifles such as having too many children, reading too many books, or even a dispute over the sale of a pig.  For the judges, to stop the hangings would be to admit that there never had been any witches.  To send more people to the gallows is simply easier for them than to admit they have murdered so many innocents, the moral path of least resistance.

Beneath the surface, there is a tantalising hint that the town has been cursed by some kind of original sin, and that the sin lies with John Proctor (Duncan Ley).  All roads lead back to John Proctor.  First, the leader of the witch girls (Abigail, a frenzied Zoe Priest) is half-mad with love for John.  Second, Abigail was only out in the forest in a desperate and surprisingly successful attempt to place a curse on John’s wife Elizabeth (Lexi Sekuless, believable and likeable in the demanding part of a “good” woman).  Third, John led her on with an act of adultery.  Fourth, after the girls are first  discovered Abigail gives John a full confession that if shared in court would smash the credibility of Abigail and the other witch girls.  All of the Salem witch hunts is tied up in and explained by John Proctor’s sin, guilt, confession, and ultimate sacrifice.  Perhaps it really is the wrath of God after all.

Jordan Best’s direction is energetic and vivid, imbuing spiritual confrontations with a needed physicality.  Duncan Ley and Lexi Sekuless give the strongest performance of the play as the Proctor husband and wife: their intimacy is completely believable, and we feel both that their relationship has been hurt by adultery and that they still love each other.  As in every marriage, much is unspoken, but more can be seen in how they look at each other.  Ley’s Proctor is rough and almost brutish but we see pieces broken off him until in the end he is finally both completely helpless and at last immovable.  Duncan Driver is also strong as witchfinder Hale, although perhaps too worldly: he is too cocksure to be innocent of how ruthless his methods are, at one point lamely telling us that he has considered that his methods might yield more false confessions than true.  Zoe Priest and Yanina Clinton also also extremely compelling as the yin and yang of the witch girls, with Zoe as Abigail descending further into madness and bloodshed while Yanina’s Mary tries helplessly to clutch onto a sliver of sanity and goodness.  The huge cast make the most of sometimes brief appearances, together providing a believable picture of a community snapping apart as it is devoured by a madness none of them can fully understand or control.

While Proctor’s story is powerful, it blots out the backstory of the witch girls.  What led these Puritan women to dance in the forest and play at witchcraft?  Were their lives too restrictive?  Or was it simply boredom?  They are so dominated by Abigail’s lust and ferocity that they are too scared to speak against her.  Their silence gives no answers, and the moments in court where they pretend to faint and rave only make them more alien and unknowable (I was reminded of the children in Village of the Damned).  Arthur Miller’s script is brilliant, but it is ultimately fascinated with Proctor’s conscience and his battle with a totalitarian court (understandable - iller intended his play as an attack on the Communist witch hunts of the 1950s).  By making the dance in the forest and the motivations of the women so recognisable, Best makes us crave more of them - but the script has other interests.

Overall, the play is thrilling and engaging.  The only place where it slightly falters is in the judges.  Mark Burnett’s chief justice Danforth is stern and domineering, but lacks true Old Testament religious fury.  He is also much too isolated, especially by the end of the play when the witch hunts are winding down.  Revolution is in the wings because harmless and innocent people are facing execution and there are hints that Danforth’s superiors are, if not washing their hands of him, at least getting the soap ready.  So why didn’t somebody just hit him on the head with a rock?  Instead everyone trots off meekly to the gallows - perhaps Parris was better at spreading the gospel than anyone suspected?
Ultimately, Danforth is irrelevant, and the witch trials are irrelevant: the sin is Proctor’s, the suffering is Proctor’s, the judgement is Proctor’s, and the Crucible is Proctor’s - thy will be done.