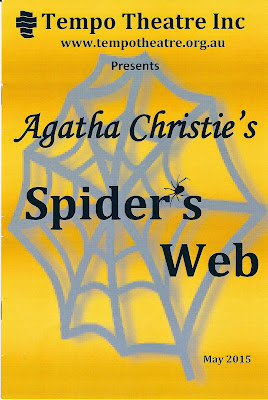 ‘Oh, what a tangled web we weave…’ says the police inspector towards the end of Agatha Christie’s ‘Spider Web’.  The Queen of Crime plays wonderful puzzle games with the audience in this complex and, surprisingly funny, thriller.  The Tempo Theatre cast and director, Jon Elphick, have obviously had a lot of fun staging this and the large opening night audience showed how much they enjoyed it with laughter throughout and strong applause at the end.

An original play, it was written in 1953 at a peak in Agatha Christie’s play-writing period.  Both ‘The Mousetrap’ and ‘Witness For The Prosecution’ were still running when this one opened in 1954 and ran for 774 performances.  The plot might seem dated, the characters quaint and the police procedures definitely lacking but it doesn’t matter.  You’re carried along like you’re on a fairground ride and you’ll enjoy it.

Amongst the large cast are several standout performances.  In the leading role, Sarah Bourke shines as the woman trying desperately to cover up what seems to be an accidental killing.  Tony Cheshire underplays nicely as the sinister butler, Elgin, and Marian Fitzgerald is very funny as the meddlesome gardener, Mildred Peake.  Kim Wilson gives a believable country gentleman performance as Sir Rowland and Shane Horsburgh as the police inspector displays a fatherly warmth with a hint of steel under the surface.

The set, designed by the director, is simple but attractive and is well lit by Chris Donohue.  Costumes are fine, with a particularly nice one worn by the leading lady.

This company revels in doing these older plays and their enjoyment shows in the playing.  The play gives plenty of opportunity for comedy and the laughs are all there.  There were times when the pace flagged a bit and some of the acting was a bit uneven but it was never less than enjoyable.

Director, Jon Elphick, has produced an entertaining version of this Agatha Christie play.  His Tempo Theatre company have developed a unique niche in the market for these vintage plays which no-one else is doing in Canberra.  I made the usual fool of myself telling friends at interval who I thought the murderer was – and I got it wrong.  Go along and see if you can work it out.  I bet you can’t!