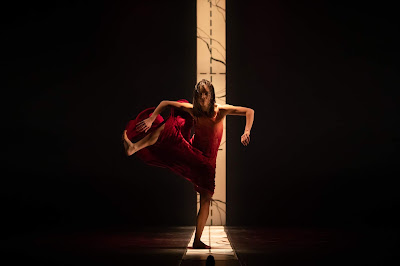 This 30th anniversary production for Bangarra Dance Theatre is a generous feast of modern dance, with the company’s daring spirit invigorating past triumphs.

For this production, artistic director Stephen Page has taken inspiration the word Bangarra itself, which in Wiradjuri means “to make fire”. Here, dance both expresses and ignites passion for Indigenous culture and history.

The music of the late David Page unites the show, with his playful but uneasy synthesis of classical music and the ambient sounds of the natural world reflecting the production’s twin themes of reclamation and reconciliation.

A veil that resembles a jumbled $50 note screens the stage, a provocation that we are going to peer beyond conventional cultural knowledge to discover the true soul of philosopher, inventor and Ngarrindjeri man David Unaipon.

The three phases of the work explore Unaipon’s Indigenous heritage, passion for science, and Christian faith. A contrast is drawn between nourishing awe for the natural world and harsh science that demands a command performance of the elements. Unaipon’s scientific curiosity veers into the mystical, with his hopeless quest for perpetual motion brilliantly represented by dancers that dwindle and tire with the search. Christian belief is depicted as painful and oppressive, with the dancers bent on their backs and feet reaching to heaven while an Angelic choir dominates the soundscape. The progress of the piece shows the burbling real world scraped back, until all that is left is the inhuman but wondrous perfection found in the orbit of the stars.

Stamping Ground (1983) by Czech dancer Jiří Kylián is a first for Bangarra, a piece by a non-Indigenous choreographer.

This odd duck of a dance is a creative response by Kylián to a large corroboree he witnessed on the island of Groote Eylandt. Beginning in silence, the only sounds that can be heard are the sheepish hand slaps and foot stomps of a dancer. When the music begins, the rattling drums sound like hype for a circus stunt. Floppy movement, awkward poses and flashes of coquettish shyness give the dance an irreverent spirit. The comic effect is completed by a shimmering curtain that could be the budget set of a high school talent show, with costumes that make the performers look as though they’ve stripped off for a dip in the pool.

As strange and idiosyncratic as the piece is, it is deeply energising. This is a dance that finds momentum by embracing silliness and vulnerability, splitting the atom of shame for a brazen explosion of riotous fun.  On the heels of the Unaipon’s exhausting hunt for the sublime, the bathetic punchline is that Kylián found an equation for perpetual motion in the self-renewing spirit of an Indigenous corroboree.

The final piece is To Make Fire, a hybrid of previous Bangarra works Mathinna, About, ID, and Rush.

While intended as a summation of Bangarra’s thirty years, this meditative piece was in uneasy company with the vivid Unaipon and the hallucinogenic Stamping Ground. The snippets of past shows felt like campfire stories, rather than facets of a raging bushfire. The range of topics explored here - stolen children, connection with nature, endurance - gave a vista of Bangarra’s creative preoccupations, but without the intensity of single-minded focus. Still, there were moments of great power, such as the take-no-prisoners opening with a dancer suspended by their feet or the red dress sequence from Mathinna.  The piece was also highly successful in conveying an Indigenous resilience founded in the indestructible stories that weave past and present together.

While much of the work in this show has been performed before, the selections on display here are worthy representations of Bangarra’s accomplishment and spirit.  The performance has an energy that looks ahead - not just to the next thirty years, but perhaps to the next sixty five thousand.
Posted by Canberra Critics Circle at 11:48 PM