With the Luminescence Children’s Choir, founder and Artistic Director, AJ America, has given Canberra children a unique opportunity to learn, perform and appreciate fine and often challenging music.

Established in 2016, the choir is an auditioned treble choir for Canberra-based musicians aged 10 to 17.  The choir regularly performs at local national institutions and toured in 2018 to Hobart and Melbourne to participate in the Festival of Voices.

Later this month, they will tour to Sydney to participate in the Gondwana World Choral Festival at the Sydney Opera House.  This concert gave us the opportunity to hear some of the repertoire they will be presenting at the Festival. 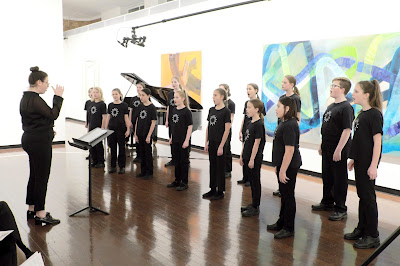 Dressed in black with the choir logo on their T-shirts, their visual presentation is simple but impressive.  Careful thought has clearly been given to their initial arrival on stage as well as their changes of position during the concert.  This was also visually pleasing for the audience. 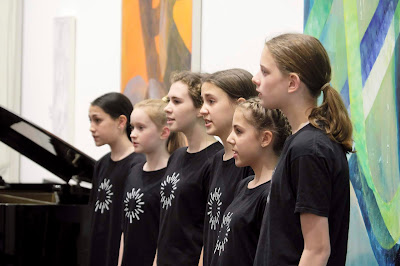 The program included works by Britten, Mozart and Mendelssohn as well as a number of contemporary works.  Most it was sung a cappella and some works were accompanied on piano, played with great skill by Veronica Milroy.

The standard of the singing throughout the program was very high.  Choir members were impressive in their stillness, concentration and self-discipline.  Everyone sang with confidence and accuracy.

They gave particularly fine performances of a set of five songs entitled “Friday Afternoons” by Benjamin Britten, especially “Fishing Song” and “Jazz-Man”.  They followed this with a haunting performance of Mozart’s “Caro Bell’ Idol” in which their sustained high notes were especially impressive.

It was nice to see the choir obviously enjoying their singing of contemporary Bulgarian Petar Liondev’s “Kaval Sviri” and they sang the challenging “Fiat Lux” by Australia’s Alice Chance very well.  The highlight of the show was their excellent performance of Australian Joseph Twist’s haunting “Rain Dream”.

The choir’s musical abilities were spectacularly reinforced during the finale, “Our Song” by Kate Miller-Heidke.  Conductor, AJ America, suddenly walked away from the podium and left the children to sing unconducted and with no musical accompaniment.  They never missed a beat, bringing this memorable concert to a close.