THE CHOIR OF KING'S COLLEGE, CAMBRIDGE 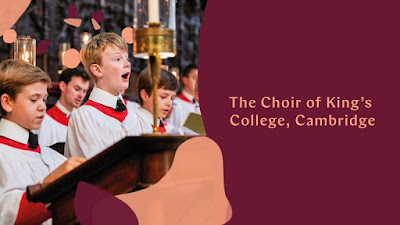 Reviewed by Len Power
In a sold-out performance at Llewellyn Hall, The Choir of King’s College, Cambridge presented a hugely memorable concert.

The choir has been in existence since King’s College at Cambridge was founded by King Henry VI in 1441.  Its primary purpose has always been the daily singing of services in the college’s chapel.  With extensive touring and recordings, the choir enjoys an internationally famous reputation.

Presented by Musica Viva, the choir is touring Australia with concerts in the capital cities.  Canberra was given the second of two programs being presented.  The director of the choir, Daniel Hyde, described it as a ‘chamber’ program.  The choir was joined for certain items by harpist, Alice Giles, and cellist, Umberto Clerici.

The large program included several works by 16th and 17th century composers such as Monteverdi, Cavalli, Byrd, Tallis and Gibbons.  Works by later composers such as Britten and Vaughan Williams were also presented and there were works by contemporary composers Judith Weir, Errollyn Wallen and Australia’s Ross Edwards.

Commencing with Monteverdi’s ‘Cantate Domino’, the choir impressed with their clear diction, finely sustained notes, confidence in maintaining the various parts and the sheer beauty of their voices.  The contrast between the voices of the men and the boys gave the works a notable depth and colour.

The quality of performance was sustained through every item.  Highlights of the first half of the program included a moving performance of Bach’s ‘Komm, Jesu, komm’, Cavalli’s ‘Salve Regina’, sung with great feeling by the men only, and the glorious ‘A Ceremony of Carols’ by Benjamin Britten.  There were also fine accompaniments by cellist, Umberto Clerici and harpist, Alice Giles.

The second half commenced with a joyful performance of William Byrd’s ‘Laudibus in sanctis’.  It was followed by Thomas Tallis’s ‘Loquebantur variis linguis’ with its intricate harmonies expertly sung.

Singing the challenging contemporary works of Ross Edwards, Judith Weir and Errollyn Wallen, the choir showed it was equally at home with more than just traditional choral works.

The program finished with a superb performance of Vaughan Williams’ ‘Valiant-for-truth’.  The response from the appreciative audience at the end of the concert was deservedly overwhelming.