THE ART OF COARSE ACTING 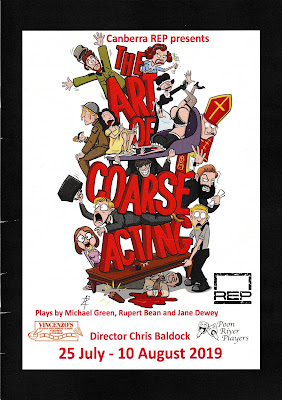 Like the director, Chris Baldock, one of the books in my collection that I treasure most is Michael Green’s ‘The Art Of Coarse Acting’.  First published in 1964, it is still in print and the phrase ‘coarse acting’ has gone into the language.  While it’s hilariously funny, it really does provide a textbook on what not to do as a performer.

Four of the plays presented are by Michael Green.  The other two plays, ‘Present Slaughter’ by Jane Dewey and ‘Pride At Southanger Park’ by Rupert Bean had their origins in English Coarse Acting competitions.

Chris Baldock and his large ensemble of enthusiastic players have obviously had a lot of fun putting this collection together.  You need good actors to make this work and his team all show how skilful they are.  Chris Baldock never misses a trick with his nimble and inventive direction.

Six plays of differing styles in one evening need an extraordinarily clever set design that’s able to be changed swiftly.  Set designer, Andrew Kay, has excelled even himself here with colourful and necessarily clichéd sets full of rib-tickling tricks.  Set coordinator, Russell Brown, and his team have carried out the mechanics of the design perfectly.  Jeanette Brown and Antonia Kitzel have come up with a great set of costumes and Antonia Kitzel must be run off her feet backstage looking after the myriad of props.

The plays are bookended with a very theatrical director, nicely lampooned by Steph Roberts, leading us through a ‘Best of British’ evening of plays by the Poon River Players.  Sour puss stage manager, Liz St Clair Long, is a delight in her fleeting appearances from backstage eventually leading to a very funny emergency fill in onstage for an indisposed actor.

The plays that work best in this collection are those where a problem on stage has the actors trying to cover up and continue, hoping the audience won’t notice.  ‘A Collier’s Tuesday Tea’ and ‘Present Slaughter’ were, for this reason, the funniest and most truthful of the collection.  The jokes come thick and fast in the other plays but the plays themselves are a bit long so even the jokes feel a bit laboured after a while.

Still, it’s a fun evening and everyone in the audience had a good laugh.  There was even an amazing coincidence.  The lucky door prizes handed out during the evening were all won by the local Canberra critics, including myself!

Len Power’s reviews are also broadcast on the Artsound FM 92.7 ‘In the Foyer’ program on Mondays and Wednesdays at 3.30pm.
Posted by Canberra Critics Circle at 11:46 AM