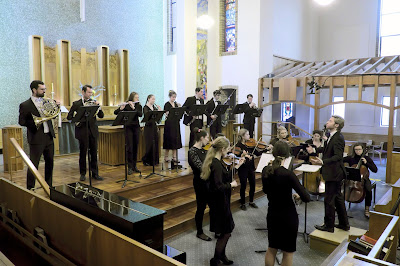 On the 21st of July 2018, Canberra Sinfonia gave their inaugural concert – a program of Mozart and Schubert, conducted by Leonard Weiss.  Their patron, singer Louise Page, stated in the program for that concert that ‘one of the hardest times in a young musician’s life is bridging the gap between student training and employment with an established musical body’.  Canberra Sinfonia was created to help bridge that gap.

Now, a year and several memorable performances later, they celebrated their first birthday with a concert of music by Haydn and Wagner, again conducted by Leonard Weiss.

The program commenced with ‘Siegfried Idyll’ by Richard Wagner.  Composed as a birthday present to his second wife, Cosima, after the birth of their son, Siegfried, in 1869, the piece received its premiere in 1870 at the Wagners’ villa in Switzerland, with Cosima awaking to its opening melody.  Wagner’s opera, ‘Siegfried’, which premiered in 1876, incorporates music from the ‘Idyll’.

The orchestra gave a fine performance of this atmospheric work.  There was a great confidence and clarity in their playing, bringing out the full colour in the music.

Haydn’s Symphony No. 92 in G major made up the second half of the concert.  It was composed in Paris in 1789 and was later given the nickname of the ‘Oxford’ symphony in the mistaken belief that Haydn had played it in 1791 in Oxford when he received an honorary doctorate.  In fact, he played a minuet which is heard in Haydn’s 1772 symphony no. 47.

The orchestra gave an especially strong performance of the second half of the first movement.  There was a real sense of excitement in their playing, edgy and crisp and very satisfying.

The melodies in the adagio second movement were played with warmth and sensitivity.  The orchestra played the last two movements with great skill and accuracy, handling Haydn’s witty timing elements very well.

Canberra Sinfonia demonstrated with this birthday concert that they are a major force in the Canberra musical scene.  These young musicians have gone from strength to strength in the past year, demonstrating a high level of skill and maturity in their playing.

Len Power’s reviews are also broadcast on the Artsound FM 92.7 ‘In the Foyer’ program on Mondays and Wednesdays at 3.30pm.
Posted by Canberra Critics Circle at 9:18 AM