FROM RUSSIA WITH LOVE - SELBY & FRIENDS 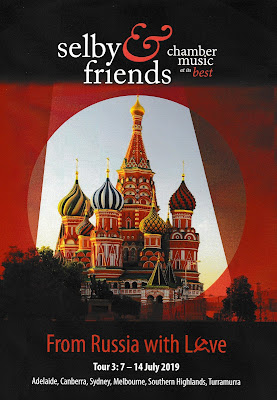 In their concert, ‘From Russia With Love’, Selby & Friends clearly demonstrated they have a licence to thrill.  A carefully chosen program of mostly Russian works was superbly played by the trio of Kathryn Selby, piano, Daniel Dodds, violin and Timo-Veikko Valve, cello.

Australian Kathryn Selby began her piano studies at the Sydney Conservatorium of Music and earned her Master’s Degree from New York’s Julliard School, leading to a busy international career on the world’s concert stages and at home in Australia.

Daniel Dodds is an Australian violinist who enjoys an international career playing works from the early baroque period to those by contemporary composers as well as crossover projects with jazz, tango and far eastern elements.

Cellist, Timo-Veikko Valve, is from Finland and performs internationally as a soloist, chamber musician and orchestral leader.  In 2006, he was appointed Principal Cello of the Australian Chamber Orchestra with whom he frequently appears as soloist.

The concert commenced with the lush ‘Romance’ by Alexander Scriabin.  This charmingly romantic work was played with great feeling by Selby on piano and Valve on cello.

A change of mood followed with Tchaikovsky’s poignant ‘Meditation from souvenir d’un lieu cher’.  The playing of the finale filled with high emotion was particularly fine.

Debussy’s Piano Trio in G major was given an extraordinary performance by the trio.  The delightful free-flowing and colourful first movement was followed by a tightly played second movement in which the charming melodies tumbled back and forth with skill and a sense of fun between the performers.  The grandly romantic third movement was especially well-played and led to a passionate and edgy finale.

After interval, the trio performed Rachmaninov’s Piano Trio No. 2 in D minor.  Sub-titled ‘Elégiaque’, this beautifully reflective work in three movements was written in memory of Rachmaninov’s friend, Tchaikovsky, who had died shortly before.  The trio gave an outstanding performance of this work which took us on a journey through every possible emotion.  The piano parts dominate the second and third movements and Kathryn Selby’s sensitive playing expertly conveyed the composer’s emotional intentions.

Selby & Friends' fine concert will stay in the memory for a long, long time.