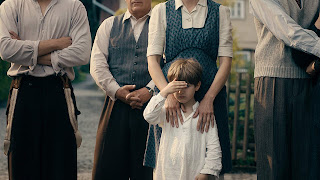 It isn’t possible to look away from this imposing film for long. Maybe to check the time―it does run for over three hours―or to block out a harrowing moment, but it has a commanding and sensual beauty that isn’t around much at the moment. Top marks to the cinematographer Caleb Deschanel. And like writer-director Florian Henckel von Donnersmarck’s first film, The Lives of Others, it has something serious it wants to say.

The central character, Kurt Barnert, is a little boy when we meet him on a sunny day in beautiful Dresden in 1937, visiting an art exhibition with a lovely young woman, probably too young to be his mother. As they stand in wrapt attention in front of the Kandinskys and Picassos on display, the tour guide launches a rant denouncing degenerate modernism. The child hardly notices, he is entranced. 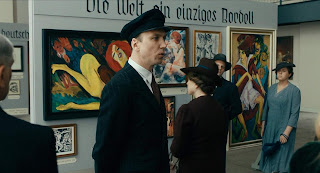 The paintings captivate his aunt Elisabeth (Saskia Rosendahl) too and she assures Kurt he should trust his curiosity and never avert his gaze, because ‘everything true is beautiful.’ It’s all he needs to know.

Averting the gaze takes on wider implications as the narrative progresses, and is caught up in the obscenities of the Nazi regime.

At home later that day, Elisabeth’s heightened awareness turns bizarre and there is an episode of self-harm. Kurt’s beloved aunt is schizophrenic, eventually brutally eliminated by the Nazi regime for what is judged her unsuitability to bear children.

After the war, Kurt (played by Tom Schilling) is studying art, but he struggles to find meaning in the Socialist Realism he is required to produce in Communist-era East Germany. The role of the artist in society is of course what this is all about, as Kurt tries to work out his own style and vision while living through his country’s turbulent recent history.

At this time, he falls in love with another Elisabeth (Paula Beer), who he nicknames Ellie. A fashion student, an uncanny doppelganger for his late aunt, who is the daughter of a highly-ranked medical officer with a shadowy Nazi past. The ‘reveal’ as he leans towards his daughter’s bedside lamp is one of the best there is.

Sebastian Koch had a key role in The Lives of Others, as a playwright under surveillance by the Stasi. Here, as Professor Carl Seeband, he is another compelling character, and really more interesting than Schilling’s Kurt, who doesn’t have the same presence or complexity. A game something like ‘cat and mouse’ develops between Kurt and Carl, and the two generations they represent. 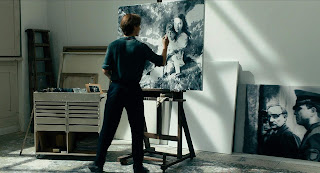 It has been well-documented that von Donnersmarck based this fascinating story loosely on the life and work of the German artist Gerhard Richter, and many of the details match. But it is probably safe to say that both filmmaker and artist have been at pains to distance themselves from direct attribution. This is no biopic.


Never Look Away feels like a labour of love from von Donnersmarck, who both wrote and directed, and it is so good to see his return as a filmmaker after his last film, The Tourist. A dull romantic thriller with Johnny Depp and Angelina Jolie, it also brought beautiful people together on screen, but gave them nothing to do.

When the Nazis were consolidating their power in 1937, they understood only too well the importance of mind control. An exhibition of degenerate art famously represented much of what was wrong with the old order: individual expression, artistic freedom, and 'dangerous' things like that.

In its original German language version, the title for Never Look Away is Work Without Author. There is a documented reason for this that is part of the production backstory, rather than an invitation to consider any ‘death of the author’, but it adds an intriguing dimension to ways to respond.

Never Look Away or Work Without Author, what you will, it’s going to stay with you, long after viewing.

Jane's reviews are also published on her blog, the Film Critics Circle of Australia, and broadcast by ArtSound FM MHz 92.7/90.3
Posted by Canberra Critics Circle at 2:35 PM