The concept for Yesterday is terrific. It’s hard to imagine a better reason for getting the Beatles’ back catalogue into a movie, played one by one and in each song’s entirety, as though only just composed. The very idea that no one in the world has ever heard of the Beatles is a great excuse, and Yesterday is based on a brilliant idea with great comic potential.

After a collision with a bus while cycling through an electrical storm, Jack Malik (Himesh Patel), wakes up in hospital minus two front teeth, but his cultural memory intact.

When he’s recovered, Jack sings 'Yesterday' for his friends at the pub with his new guitar, but they act like they've never heard it before, and regard it as his composition. It’s not that they are overwhelmed by it either. ‘It’s not Cold Play.’ In another scene, he tries to do a rendition of ‘Let it Be’ on piano for his parents and their friends, the Beatles generation after all, but they are hilariously inattentive. 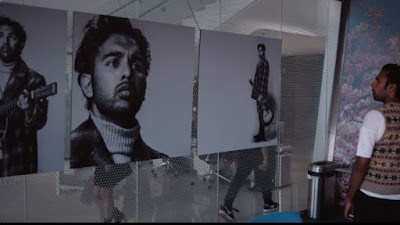 In a global outage during the storm, the Beatles were erased from everyone’s memory, and somehow deleted from cyberspace, along with band Oasis who emulated them. ‘That figures,’ mutters Jack. But the Stones roll on.

Before this happened, Jack had given up a lot for his own music – his teaching job, his independence, and something of his father’s respect – and now he has suddenly found himself in sole possession of a treasure trove of songs that changed the world.

Actually it’s a sheer pleasure to hear the songs in Patel’s hands, as he performs them really well. It’s a reminder that voice and accompanying guitar or piano is all you need for melodies so good they stand on their own, without the video or the elaborate backing.

Finding a manager with imagination and vision who recognises a great song when he hears one takes a little time. Time in which managing Jack’s potential passes from his manager, and would-be girlfriend, Ellie (Lily James) to Ed Sheeran , who in a big-hearted performance plays himself, a lessor songwriter than the Beatles.

Ellie is a sweetie, but Jack’s roadie Rocky (Joel Fry) is more entertaining, and so is the rapacious agent in LA, Kate (played brilliantly by Debra Hammer), for whom Jack has to suffer the indignity of a makeover. It’s the support characters in Yesterday who are by far the most fun.

The slick marketing campaign for Jack’s ‘One Man Only’ album is a marvel of cultural engineering that can only be spot on. And the sales pitch of a sole genius is a reminder of how the chemistry of collaboration made the Beatles incandescent.

The songs catch on eventually and Jack staggers into stardom with his guilty secret.

As an exponent of the Beatles' golden oldies, Patel's Jack Malik does what’s called for in a character to whom amazing things happen, yet something is missing. 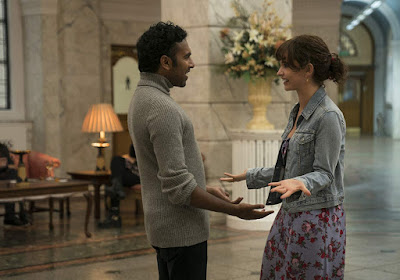 Even though Yesterday has a dream team at the helm. Writer Richard Curtis and director Danny Boyle who were behind some of the biggest movie hits in recent memory – Four Weddings and a Funeral and Notting Hill (Curtis) and Trainspotting and Slumdog Millionaire (Boyle).

It is a joyous experience, sprinkled with sweet moments, and infused with warmth and fuzzy feeling, but Yesterday is mildly disappointing.


As a tribute to the Beatles, it only tells half the story. We don’t remember the band just because they were cute or their songs were sweet, they could sneer. There was so much more to them and the wave of social and cultural change they rode.


Yesterday is like biting into a scrumptious delicacy, as in high concept to die for, only to discover there isn’t much substance in the middle.


Jane's reviews are also published at her blog, the Film Critics Circle of Australia, and broadcast on (Arts Cafe) ArtSound FM MHz 92.7