ARTIFICIAL DREAMS OF A MEDIOCRE GOD - A PHANTOM GRAVITY 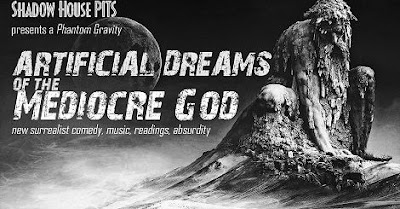 ARTIFICIAL DREAMS OF A MEDIOCRE GOD.

Archie Roach’s lyrics spring to mind as I sit in Smith’s Bookshop, waiting for Joe Woodward’s latest foray into his alternative theatrical experience to commence. Love it or hate it Shadow House Pits’ Artificial Dreams of a Mediocre God is arguably an inescapable assault on the intellect. Back to Archie’s lyrics “From little things big things grow”  Smith’s Bookshop under musician, producer and entrepreneur Nigel McRae has undergone  a fascinating transformation over the years from a bookshop to a bar and music venue to a grunge venue for artistic experimentation and under McRae an intimate theatre venue for the discerning theatregoer. Around the world independent artists test their ideas from basement cabarets to Off Broadway kickstart experiments. Think Rent. Think Hamilton. Some become influential institutions in their own right. Think La Mama in Melbourne. Think Peter Brook. Think Bertolt Brecht. Crude though the comparison may be, it is this inspiration that informs the original and declamatory rough theatre of Artificial Dreams of a Mediocre God.

Smith’s Bookshop is Canberra’s very own Off Broadway, where artists have free licence to play with ideas, experiment with theatrical form and take a swipe at convention. Woodward is no stranger to stretching the imagination, delving into the psyche and challenging the mediocre. To venture into the shadows of Shadow House Pits is to go where no one has dared to go before. It is to give oneself over to the unexpected and to sign up to an evening of confrontation and intellectual subjugation. Agree or disagree, indifference is no option. Rap is the clarion call of the discontented, the cry of protest and the pulsating sound of accusation. MC Krewd (Bambi Valentine) drives a verbal spike through complacency, punctuatd by Bevan Noble’s sound design. In a peroxide blonde wig MC Krewd is a force to be reckoned with; her rap is a gattling gun of invective, splintering the injustice and asserting the power to assume control. MC Krewd is no shrinking violet but a force to be reckoned with and a performer with guts and sassiness. She is accompanied on stage and in an expertly choreographed routine by Ink Bits, a defiant rebel, giving the finger and joining MC Krewd in an in-your-face attack on sexual exploitation and  domination.

The second half of Shadow House Pits’s  evening of somewhat surreal and weirdly bizarre collection of rap, hip hop and story telling tells the moralistic tale of Smug, adored by his parents, raised as a genius and sent to school to be a shining example of exceptionalism. Woodward, assuming his alter ego of Trinculo, Alonso’s  trickster and jester in The Tempest, narrates with actor Wynter Grainger the story of Smug, the victim and perpetrator of society’s conservative expectation. In a storytelling convention, Woodward and Grainger read the tale of the misguided Smug, who idolizes his teacher, despises his classmates and eventually becomes an educational supremo, subject to the blind enforcement of an immutable system. His obsession with Dr. Who transforms him into the doctor’s nemesis, the villainous Dalek. Smug is the victim of a stultified society, compelled to follow its commands, a lobotomy on independent thought. Smug’s destiny is pre-determined. His fate is the fate of all who would fail to question and to change.

Woodward claims that Artificial Dreams of a Mediocre God will most likely be the most unusual theatre that we will experience this year. This is the theatre of ideas, appealing more to the intellect than the heart. It is rough, unpretentious, even unrefined. It is not the theatre of spectacle, nor the theatre of seduction. It is the theatre of the intellect, an hour of engagement with anarchic inquisition, best experienced with a glass of preference in one’s hand and a mind prised open by MC Krewd’s audacious brashness and Woodward and Grainger’s simple storytelling and lucid dialectic.

Woodward defies the theatre of seduction. He abandons the artifice of that willing suspension of disbelief and is more closely aligned to the tenets of Brecht than the aficionados of Theatre of Illusion and Spectacle. At Smith’s Bookshop it is the mind that is opened and the open door of apathy that is closed.  If you haven’t been to Smith’s Bookshop, treat yourself to a night of mental stimulation and intellectual illumination. It is an experience that you are unlikely to have in any other theatre this year.