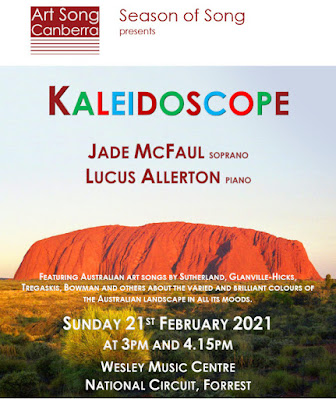 As autumn approaches with its expected change of colours, it was an inspired idea to celebrate in song the astonishing kaleidoscope of the colours of nature we experience in Australia.

Soprano, Jade McFaul, was born in South Australia in 1996 but moved to Canberra in 2014 and completed a Bachelor of Music (Honours) degree at the Australian National University.  She has won several prizes in music and voice and is regularly involved in local music ensembles and choirs.

The concert reflected Jade McFaul’s advocacy for the programming and performance of Australian art songs which explore the relationship between poetry and music in this form.

The program commenced with “The Rainbow”, composed by Australia’s Calvin Bowman to a text by American poet, William Jay Smith.  It was a good choice for the start of the program, displaying the range and quality of McFaul’s beautifully clear soprano.

From there the program concentrated on individual colours, several set by composers to the texts of the early 20th century Australian poet, John Shaw Neilson.

With “The Orange Tree”, composed by Horace Keats, McFaul displayed the notable clarity of her diction as well as the ability to project the depth of emotion underlying the song.  With “You And Yellow Air”, composed by Alan Tregaskis, McFaul’s confidence and joy of singing was clearly displayed as she told this touching love story.

Other highlights of the program included “Now Touch The Air Softly”, composed by Calvin Bowman, which was sung with great delicacy and sensitively accompanied by Lucus Allerton.  “The Hour Of The Parting”, composed by Gerald Glynn, was another highlight requiring a distinctive change of mood to create a melancholy atmosphere of lost love.

The finale, “O Yellow, Yellow Sweet”, composed by Alan Tregaskis, was uplifting, melodic and beautifully performed by both singer and accompanist in perfect harmony, bringing this excellent concert to a close.

This review was first published in the Canberra CityNews digital edition 22 February 2021.