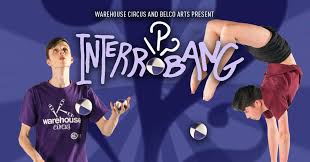 “That was so good. I don’t want it to end” said a young voice behind me at the end of Warehouse Circus’s “Interrobang.” After thirty years of training young performers in the art of the circus, Warehouse Circus has every right to celebrate a rare longevity in Canberra’s performing arts world. Interrobang, which the programme notes tell me is the combustion between the question and the exclamation describes the curiosity, exciting wonderment and explosive risk taking and skilfully artistry of the circus world. It is no surprise that many young children dream of running away to join the circus, and the company of Interrobang have chosen to do just that to be inspired by the exciting magic of clowning, juggling, acrobatics, aerial feats and hula hooping. 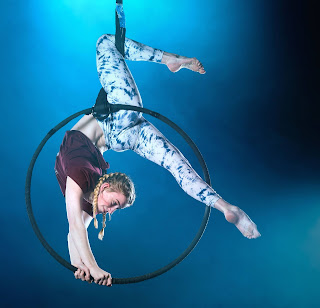 But Interrobang is much more than a display of circus skills. This is a finely crafted theatrical entertainment, as notable for its ambience as for its artistry. In the elegant Belconnen Theatre and aided by Idris Stanbury’s enticing sound design and Linda Buck’s mood enhancing lighting design, the youth and exuberant ensemble showcase a cavalcade of familiar and yet inventively re-imagined circus skills. From the opening removal of sheets to reveal an array of brightly costumed performers, the show is tastefully choreographed and carefully executed.The audience oohs and aahs with gasps of amazement as performers are swung into the air to land on shoulders or be caught before falling to the floor. Each act is a skilfully executed and presented moment of proud performance. Grace and control typify work on the cyr wheel or the aerial hoop. Focus and timing typify the hours of rehearsal to perfect acts with the juggling batons or a daring display of bodies being swung beneath leaping ensemble members. The teamwork is exemplary and the audience gasps with delight and astonishment. Warehouse Circus has grown into a company of enthusiastic and assured young performers in  a performance that assumes a professional gloss. These are still artists learning their trade and directors Ashley Cox and Idris Stanberg have been careful to highlight the expertise of their young circus performers in acts that are sensitively and realistically staged to maximize the talents of the company. 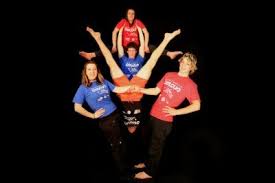 Clowning is an inherent aspect of a visit to the circus. A young girl behind me burst into  giggles and unrestrained laughter at a clever routine with appearing and disappearing balls. A simple routine and trick of the clowning trade was enough to lend the show a humourous twist. I was particularly impressed by one performer doing a hat routine to Singing in the Rain. However, there is still scope for further exploration of the clowning art. Some moments were too rushed or not given enough prominence in the set-up, the anticipation and the unexpected revelation. Drawing on slapstick and surprise, clowning has a rightful place in any circus performance. It is an area for the Warehouse team to explore further.

At the edge of danger lies the thrill to challenge performers and excite audiences. Interrobang was not without its fumbles at times. That is part of the risk-taking that makes circus fearful as well as enticing. The occasional mistake is well handled by the performers and their  trainers have ensured a show that is a credit to the team and one hour of amusing, thrilling and at times breathtaking entertainment.

After thirty years, Warehouse Circus has certainly earned its stripes and if Interrobang is anything to go by, not even a pandemic could dampen the spirits or threaten the bright promise of many more years of Warehouse Circus’s shows to come. Happy 30th Birthday Warehouse Circus and here’s to the next thirty . Something so good won’t come to an end.