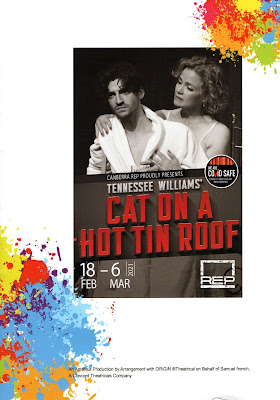 I hope that Canberra Rep will continue, every twenty years or so, to put on Tennessee Williams’ Cat on a Hot Tin Roof, to remind us how family life, sexual relations, money matters and sport are all tied up in the one terribly complicated knot.  This week I should also include a special reference to party politics and the treatment of women in a parliamentary democracy, which Williams could well have covered in his America in the 1950s.

The Rep 2021 production of Cat on a Hot Tin Roof is very good indeed, tied together even more tightly, I think, than in 2001.  (Reviewed in The Canberra Times, April 28 2001; available at www.frankmckone2.blogspot.com.au)

Even if often with pro input, in an amateur repertory company it can be a matter of good luck to find a cast that suits all of Williamson’s expectations.  But the difference in quality in these two Rep productions is nothing like as great as some people see between the original movie and the later one (1984) with Tommy Lee Jones and Jessica Lange, Rip Torn, and Kim Stanley, described on Youtube as “True to Tennessee Williams's original play (unlike the awful Paul Newman / Elizabeth Taylor movie from 1958)”.

Rep’s casting, characterisation and consistency of team work in this presentation is particularly satisfying.  Even the great recent Sydney Theatre Company production (reviewed here May 19, 2019) could be seen as concentrating more on the stars – Pamela Rabe (Big Mama), Zahra Newman (Maggie) and Hugo Weaving (Big Daddy) – rather than giving as much status to Brick, Mae and Gooper.  At Rep last night I came away with an equal sense of the importance of each one of these six central characters, and the solid support of Rev Tooker and even from the small part of Dr Baugh.  Rather than being overwhelmed by Big Daddy and Maggie, I felt I understood better, and with more sympathy, not only their needs and why they behaved as they did; but also the relationships between the brothers Brick and Gooper, their wives Maggie and Mae, and the essential role in the whole family of Big Mamma.

When it comes to detail, Williams did not make casting easy.  At the risk of seeming sexist, for example, I have to say that when Williams makes Maggie stand before a full length mirror and point out that she has not lost her figure, Victoria Tyrrell Dixon absolutely looked the part.  How Teig Sadhana could make his Brick unresponsive was a small miracle as I saw it.

According to www.sparknotes.com/drama/cat/summary  at the end “Maggie thanks Brick for saving her face [after announcing she and Brick are to have a child].  Brick puts down three shots, finds his click, and exits indifferently.  Maggie forlornly gathers Brick’s liquor bottles and locks them away, refusing to release it until he has sated her.  Desperately she declares her love for him.  The distant Brick can only reply: ‘Wouldn’t that be funny if that was true?’”

However, www.gradesaver.com/cat-on-a-hot-tin-roof/ says “In the published script, we are left entirely uncertain as to whether Brick will concede to sleep once more with Maggie and allow her to bear a child.  The text itself leads one to suspect that nothing is going to change, but with enough ambiguity that each production can choose for itself which ending will be implied.

“In the playing script, however [for the original Broadway production by Elia Kazan], Brick ends the act sitting on the bed – and although the dialogue is also quite different from the published script, it is this stage direction that significantly weights the dice in favor of Brick having a change of heart.”

Somebody said to me in the foyer on the way out: “Interesting ending!”  I felt glad with the ending Anne Somes chose.

And glad, too, that Michael Sparks played Big Daddy with an interesting mix of attitudes towards himself and Brick in their long duologue, in which I learned that he has more self-awareness than I had thought before.  It was a softer interpretation, and, I thought, opened up a better chance for interpersonal compromise.  This makes the play, firstly, perhaps more in tune with Tennessee Williams’ intention; and secondly makes it more hopeful for the future.

Perhaps this means that Williams was too hopeful, when we consider the experiences of Brittany Higgins, when she was a ministerial staffer in the Australian Parliament, and of others such as Dhanya Mani – whose article in The Saturday Paper February 20-26, 2021 is essential reading.

I must say that Ryan Erlandsen’s characterisation of Gooper, in tight formation with Lainie Hart’s Mae, gives me little hope that greed for money-grabbing is on the way out.  A certain Mark Zuckerberg, founder of Facebook and now threatening digital insurrection against the Australian democratic government, says that Tennessee Williams’ hope in this play that Brick would recover from his depression after the death of Skipper, and justifably inherit Big Daddy’s property, is no more than a romantic dream.  And maybe my dream will one day come true: when Big Daddies and Big Mummas – and Little Daddies and Little Mummas – learn to treat each other, and are treated by others, truly as equals.

Thank you all at Canberra Rep for such theatre, so well directed, designed and performed.