Bracha - Blessing. Back to Polish Shtetls

A fine photographic insight into pilgrimages by ultra-Orthodox Jews is on display at the ACT Jewish Community Centre gallery. Outstanding artistic black and white prints provided by the Polish Embassy provide this excellent exhibition of Chasidim (a sect of Orthodox Jews) returning to destroyed shtetls (small Jewish towns or villages) in Poland. Unsurprisingly given its origins, the exhibition prints are of a very high quality. What’s more the quality of the photojournalism is great.

Bracha – Blessing. Back to Polish Shtetls was first shown publicly at the United Nations headquarters in New York in January 2019. Writing in The New York Jewish Week at the time, Jonathon Mark quoted the then Polish Consul-General as saying “this is how my town must have looked [around] 1932, my grandmother’s reality.” Poland’s then UN ambassador told the guests at the opening that there is no Polish culture without Jewish culture. She suggested the photos showed that the traces of the Old World had not completely disappeared, and that Jewish heritage was well and alive in Poland. She did not mention that a community of millions was down to 10,000.

Although other Holocaust-related exhibits (such as one honouring diplomats recognized as “Righteous Gentiles”) were on display in the same UN lobby for longer, the Polish photographs were removed after only a week. Asked why at the time, a representative of the consulate was quoted as saying, “The status of this exhibition was a bit different.”

Since then, the exhibition has only been displayed in Dusseldorf and Tel Aviv. Now we are privileged to have it in Canberra for an extended period.

Nearly completely wiped out in the Holocaust, there are no actual permanent Chasidim communities still living in Poland. Pilgrims travel there from all around the world to visit the ancient graveyards of deceased rabbis lucky enough to have graves, tombs and synagogues.

The photographs were taken by a non-Jewish Polish woman, Agnieszka Traczewska, who gained the confidence of some of the pilgrims, enabling her to capture the piety of their activities whilst visiting their ancestral religious sites. As the Chasidic women in particular don’t like being exposed, the fact that there are some portraits of women in the exhibition is unusual.

On her website, Traczewska reveals that on her very first journey to Leżajsk, Poland for Rabbi Elimelech’s anniversary of death, she had no idea that photography of Chasidim would become her lifelong passion. All she knew was that there were men there that are part of her country’s story, part of her history, and so she had to see, learn, capture and connect.

This exhibition is a testimony to the author's passion and long-term commitment to documenting the descendants of Chasidim visiting the remains of their enduring heritage.

Unlike Traczewska, most of us, even many Jewish people, will never meet any Chasidim and are unlikely to know much about them. That makes this exhibition all the more interesting. The top-class social documentary imagery is very moving and provides us with a little knowledge.

In one particularly powerful image, we see Chasidim withstand a downpour during a visit to a Jewish cemetery. 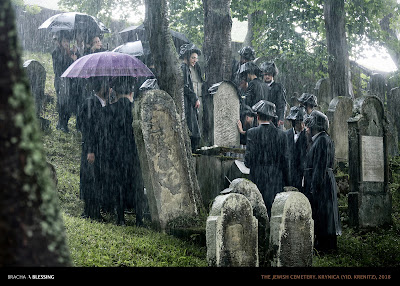 Another looks down on Chasidim davening (reciting the prescribed ritual prayer). 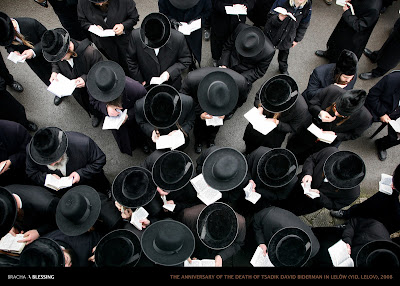 The anniversary of the death of Tsadik David in Lelow (Yid. Lelov), 2008
©Copyright Agnieszka Traczewska, 2018
Others depict ceremonies – such as welcoming a spectacular new Torah and acknowledging anniversaries of deaths. 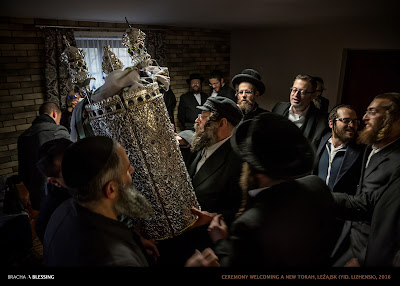 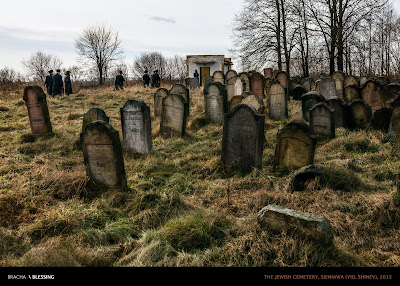 The Jewish Cemetery, Sieniawa (Yid. Shinev), 2015
©Copyright Agnieszka Traczewska, 2018
There are numerous scenes of people in synagogues and graveyards, and some very fine portraits of individuals. 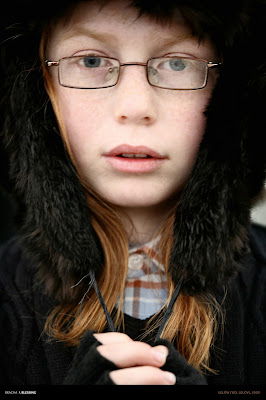 It is the first exhibition held at the ACT Jewish Community since it opened its new multimillion-dollar wing and will be on show for the remainder of the year.

This review was published in The Canberra Times on 27/2/21 here. It was also published on the author's own blog here.
Posted by Canberra Critics Circle at 11:12 AM