THE recent passing of Christopher Plummer triggered a memory of this old “Hamlet,” made-for -television in black and white and on video. 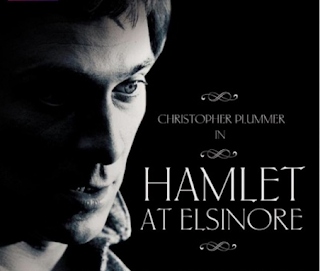 I think at the time I missed it; in a time before videotape and the web you had to be in front of the TV when something went to air.  But I read about it and was always intrigued by the prospects of the casting. Plummer was not so much the attraction at that time for me as was a version that had Michael Caine (definitely a 60s pin up, The Ipcress File…) and Robert Shaw (not so much a pinup as an unquiet presence in things like The Buccaneers and bits of Pinter and James Bond).

It went into the file of things to hunt up as the internet unearthed odd films and TV shows we thought long lost, or wiped by the BBC, like some early Dr Who.

This version was videotaped in Kronborg Castle, at Helsingor (Elsinore) in Denmark and it is possible to look up accounts of the videotaping being plagued by actors’ colds and industrial noise and the sounds of the foghorn on the nearby waters to Sweden.

I remember visiting that castle in passing years ago in winter and taking the ferry over to Sweden at night, turning down a cup of coffee from a Frenchman so I could see the castle slip away into the darkness. I seem to remember that the only Hamlet buried at Elsinore is a cat, but the castle’s web site is unrevealing on the subject and my memory prone to fancies.

So I search and find it’s actually on line and at nearly 3 hours running time is a generous look at the play.

The rooms that I think we could not get into because they were closed for winter, host a splendid echoing sound which no one has bothered to clean up. That results in an immediacy and a sense of the castle. The sea crashes on the rocks and the cannons definitely roar when needed.

Some of the cuts, elisions and juxtapositions are a little bewildering. Ophelia’s mad scenes are jammed into one and Laertes is denied both his meeting with his crazed sister and his bursting into the court of Denmark, something it would have been good to see Robert Shaw’s dangerously world weary Claudius handle. ‘How all occasions do inform against me’ has Plummer chatting to a rather nice horse as Donald Sutherland, a young Fortinbras, talking in a rather strange accent,  passes on his way to war.

The Ghost is only a hoarse voice somewhere behind the camera which somewhat mutes the impetus for Hamlet’s revenge. If Robert Shaw is Claudius, what must his brother have been like? We  don’t get a real sense of this.

Martin Clunes’ father Alec Clunes turns up as a fragile and clueless Polonius. You can find him briefly with Robert Shaw in The Buccaneers but much more notably in Olivier’s Richard 111 as the hapless Hastings. One would like to have  seen his Thomas Mendip (The Lady’s Not For Burning) and his Hamlet.

Down in Ophelia’s grave a young Roy Kinnear is a robust smart alec of a Gravedigger, prefiguring his grumbling Planchet in Richard Lester’s Musketeer films. Glimpses of Lindsay Kemp and Steve Berkoff ginger up the Players.

Gertrude (June Tobin) and Ophelia (Jo Maxwell Muller) don’t fare well in this production. Somehow neither are allowed to develop. Ophelia needs those two mad scenes and the handing out of the herbs and the reunion with Laertes. Gertrude ought to at least be permitted an attitude to that poisoned cup (does she know or doesn’t she?). Both seem burdened with clunky makeup and costumes and in Gertrude’s case, far too much mascara for close ups.

And Dyson Lovell isn’t able to do much with a Laertes missing both the scene with his mad sister and the aggressive bursting into the court when he returns.

But here’s a few actors who are well served by Phillip Saville’s production.

Robert Shaw shows what an actor he was, died far too soon, writer as well. (The Man in the Glass Booth, about the trial of Adolf Eichmann, started out as one of his novels. ) A ruthless sensual Claudius, pragmatic and terrifying. And there’s all the coming promise in Donald Sutherland and Michael Caine. Sutherland is the character actor here, making almost too much of Fortinbras, a very short role. Caine as Horatio is full of sensible compassion. The costume department has cursed him with a strange collar and mascara was always an issue with his fair eyelashes but he’s there surmounting all of this with an absolutely likeable personality.

Above all, Plummer’s Hamlet holds it all together intelligently and feelingly. He’s properly in charge of the role, no hysterics, all thinking. There was much more to him than The Sound of Music.

Well worth seeking out.

It’s been scuppered for the moment because of COVID and deprived of a West End transfer but one of Robert Shaw’s sons, Ian Shaw, has co-written a play (with  Joseph Nixon) which takes place on the set of Jaws. Shaw plays his father as Shaw senior, Richard Dreyfuss and Roy Scheider bicker and wait in the boat for Bruce the famous mechanical shark to be ready.  It’s called The Shark is Broken (which it often was). Worth looking up at theguardian.com/stage/2020/feb/05/robert-shaw-son-play-jaws-fractious-shoot-spielberg-the-shark-is-broken