CAT ON A HOT TIN ROOF 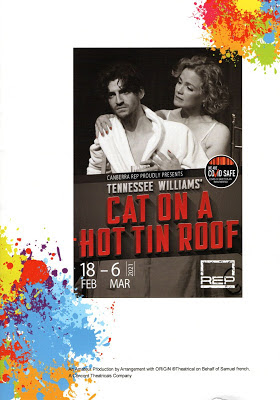 One of his most popular plays, Tennessee Williams’ “Cat On A Hot Tin Roof” was first produced on Broadway in 1955 to great acclaim.  It won the Pulitzer Prize for Drama and was made into a popular movie with Elizabeth Taylor and Paul Newman.

Set in the home of wealthy plantation owner, Big Daddy Pollitt, on the evening of his birthday, the play examines the relationships of the various family members, primarily that of Big Daddy’s son, Brick, and daughter-in-law, Maggie, whose marriage is in crisis.  As the evening wears on it becomes clear that everyone in this dysfunctional family is entangled in a web of lies or “mendacity”, as the characters like to call it.

The strength of this production is in the casting and skilful performances by everyone down to the smallest roles.  The ensemble playing is particularly notable in the group scenes with the overlapping dialogue between characters very well played.

Michael Sparks is an unexpectedly well-groomed Big Daddy whose coarseness and ruthlessness under the surface is all the more shocking and effective as a result.  His attempt to reconcile with Brick is expertly played.

Liz St Clair Long is a loud and energetic Big Mama who hides her pain under a brash exterior.  The actress particularly shines in the humiliation scene with Big Daddy and later in the play when she refuses to face the truth about Big Daddy’s health.

Teig Sadhana gives a fine performance as the drunk and bitter son, Brick, and is particularly effective in the emotionally charged scenes with Big Daddy.  Victoria Tyrrell Dixon shows a fine strength of character as Maggie, a determined outsider who proves she can hold her own against the family.

Lainie Hart as the scheming pregnant sister, Mae and Ryan Erlandsen as her partner in crime husband, Gooper, both give highly effective performances.  Rob Drennan and Saban Lloyd Berrell make the most of their smaller roles of the Doctor and the Reverend respectively.

The Southern American accents are well-maintained by everyone in the cast but clarity is often lost when characters are speaking upstage or too fast.  This was particularly noticeable in the first act.

The sprawling set design by Cate Clelland nicely evokes the Mississippi Delta location of the play.  The sound design by Neville Pye is particularly effective, especially the sound of the approaching storm and Stephen Still’s lighting design, including fireworks, adds considerably to the atmosphere.

Director, Anne Somes and her cast display an incisive understanding of the human complexities that Tennessee Williams intended with this play.  By the end you’ll feel you’ve experienced something quite special.

This review was first published in the Canberra CityNews digital edition 20 February 2021.