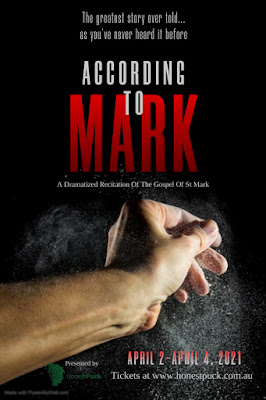 A Dramatized Recitation of the Gospel According to St Mark

Translated and dramatized by James Scott

In ‘According To Mark’, a moving dramatized recitation of the Gospel According to St Mark, actor James Scott commands the stage with a memorable one-man performance.

Set in a modern bakery, the actor commences the recitation as if in mid-conversation.  This man is not a preacher.  His joy and enthusiasm for the story of Jesus is apparent as he draws us into his consciousness.  He just has a good story to share.

The Gospel according to Mark is the second of the four canonical gospels and is considered to date to an anonymous writer in about AD 70.  It tells of the ministry of Jesus from his baptism by John the Baptist to his death and burial and the discovery of Jesus' empty tomb. There is no miraculous birth or doctrine of divine pre-existence or any post-resurrection appearances of Jesus.

As presented by the actor, Jesus is a very human presence, a puzzle even to his disciples.  As the story unfolds, messages of life promoting harmony amongst people come through and resonate for us so many centuries later.

The recitation has been translated from the Koine Greek and dramatized by the actor, James Scott.  Koine Greek was the common form of Greek spoken and written during biblical times.  Scott’s translation into a contemporary, conversational form of delivery is effective in its simplicity and level of detail.  The brief sketches of the characters interacting with Jesus are colourful and real and Scott gives them an effective voice and personality.

We don’t learn anything about the background and motivation of this modern day baker.  It’s not necessary.  He’s a simple man sharing a story with us.  As he speaks, he continues working, sifting flour, adding ingredients to a bowl and finally popping the resulting mixture into a microwave oven.  We soon become aware of the unmistakeable aroma of cooking hot cross buns.

The production moves at a fine pace with both dramatic and quiet moments and nicely-judged eye-contact with the audience.  The simple bakery set and contemporary music create the right atmosphere.  Projections of mostly medieval and Renaissance paintings to illustrate the episodes of the life of Jesus have been well-chosen.  It was an excellent decision to show the sequence of paintings quickly a second time at the end of the play to remind us of the remarkable journey of the life of Jesus that we had just shared.

As we left, we were offered the still-warm and delicious hot cross buns that the actor had made during the show, a simple offering that was wholly appropriate to the subject matter of the play and as a welcome gift for Easter.