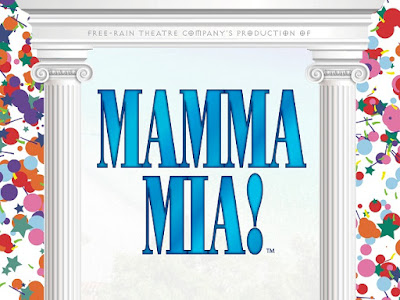 Music and lyrics by Benny Andersson and Bjӧrn Ulvaeus

Q Theatre, Queanbeyan to 8 May

‘Mamma Mia!’ is a jukebox musical that has been a phenomenal success since it first opened in London in 1999.  It ran there virtually continuously until the theatres closed in 2020 because of the pandemic.  It ran on Broadway for over 5000 performances.

Set on a Greek island resort and using the songs of the Swedish pop group, ABBA, ‘Mamma Mia!’ is about romance.  A marriage is about to happen and secret liaisons from the past may have the power to derail it.

Director, Jarrad West, has given this feel-good musical a bright and sunny production with a huge cast of enthusiastic and skilful performers.  It has been smoothly staged and moves at a frenetic pace.  The cast look like they’re enjoying every minute of it, hiding the hard work it takes to get a show to look so effortless.

Donna Sheridan, the mother of the bride, is the central role of the show and is superbly played by Louiza Blomfield.  Her soon to be married daughter, Sophie, is given a heartfelt and very appealing performance by Charlotte Gearside.  Both performers are formidably good singers and their solo songs are sung with feeling as well as fun.

Helen McFarlane as Donna’s visiting friend, Tanya, is outstanding in a role full of character and sophistication.  Her performance of ‘Does your Mother Know’ is a showstopper.  Isaac Gordon as the most prominent of the three possible fathers, Sam, gives a particularly sensitive and well-judged performance.  Everyone else in the cast gets their moment to shine and they’re all brilliant.

While it’s fun to see how the ABBA songs are shoe-horned into this slight story making the big chorus numbers great fun, it’s those moments where the song and the story come together to create real emotion that are the best moments in the show. ‘Slipping Through My Fingers’, sung beautifully by Louiza Blomfield and Charlotte Gearside, shows the feelings of a mother about to lose her daughter to marriage.  This was quickly followed by the powerful performance of Louiza Blomfield with ‘The Winner Takes It All’, a song about past regrets.  Isaac Gordon’s fine performance of ‘Knowing Me, Knowing You’ is another emotional standout.

Musical direction by Alexander Unikowski and the playing by the band were excellent and the sound balance was fine.  Michelle Heine, always an exciting choreographer, has excelled even herself here with a dazzling set of dances with her cast drilled to a high standard of performance.  The final medley is a knock-out.

The costumes by Fiona Leach are colourful and suit every member of the cast.  The lighting design by Phillip Goodwin is highly complex and adds great atmosphere to the whole show.  The clever and attractive set design is by R James Entertainment.

Anne Somes, the producer, and everyone involved with this show is to be congratulated.  Oh, Mamma Mia!, it was great!

Posted by Canberra Critics Circle at 9:51 AM