One Man In His Time.

“One man in his time plays many parts” Jaques tells the audience in As You Like It.  And no one would have played as many of those great Shakespearian parts as John Bell. He is indubitably Australia’s leading actor, director and exponent of William Shakespeare’s works and characters. Could Bell’s One Man In His Time be his valediction? Could he, after six decades and more in the Bard’s company, like Prospero cast off that cloak of magic that has graced his performances and brought such pleasure to the host of audiences that have savoured the spell he has cast. Like Prospero at the end of The Tempest is One Man In His Time, Bell’s intent to discard the revels of his time upon the Shakespearian stage? Could the man who gave us such powerful performances as Prince Hal, Prospero, King Lear, Richard lll and Shylock to name but a few now bid farewell to his devotees. As the adage goes, you can take Bell out of Shakespeare, but you can’t take Shakespeare out of Bell. He may have handed the reins of the company named after him to heir apparent Peter Evans. He may have forsaken Shakespeare’s characters for other revels, but One Man in His Time is proof positive that he still holds “sovereign sway and masterdom” over that mighty kingdom of Shakespeare’s characters and plays.

And yet, if this is his valediction, it is a most humble farewell. There is no pomp or glorious ceremony. A muted floral upholstered armchair and a circular table grace the Playhouse stage in front of a large curtain. A glass of water waits to soothe the throat and Bell, dressed modestly in shirt and jeans enters the stage with a book under the arm. With mellifluous voice as gentle as the soft wind Bell launches into Oberon’s poetic soliloquy, “I Know a Bank Where the Wild Thyme Blows”. We are entranced, lured into Shakespeare’s visions by Bell’s sorcery and mastery of the evocative verse. 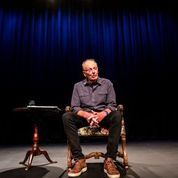 One Man In His Time could be likened to Salon Theatre. Even from an upper balcony, I felt as though the great man has visited my loungeroom, so intimate is the presentation. During a short evening, which comes to an end far too soon, Bell slips seamlessly from Shylock’s plea for understanding to Richard ll’s bemoaning of the monarch’s state to an hilarious satirical duologue between Justices Shallow and Silence from Henry lV. Bell’s command of the characters is exemplary. Whether it be the roguish Sir John Falstaff or the grieving Cleopatra or Enobarbus's splendidly visual description of the Egyptian Queen’s barge, Bell shows us that “all the world’s a stage” and after decades in the Bard’s bosom so to speak, Bell is indeed the commanding Prospero of this magnificent Shakespearean isle.

As well as conjuring the characters from thin air, Bell lends understanding to this one man show. He teaches us the difference between a speech and a soliloquy. He introduces us to Shakespeare’s method of direction through Hamlet’s speech to the Players and he enlightens us to the philosophical dilemma as expressed by Hamlet and Camus.

What the programme notes promise, but is only cursorily delivered are the anecdotes and reverie of a man whose theatrical influence on both the performance of Shakespeare’s works and their life lessons has been gargantuan. We learn how teachers played such a significant role in inspiring his love of Shakespeare. He tells us of his work with the Old Tote in those early days of seeking to establish a professional theatre landscape, and we learn that even a theatrical giant of his stature can be mentored and inspired by Paul Scofield when Bell worked with the Royal Shakespeare Company. I would have hoped for more anecdotal reference to add colour and variety to the performance. Not salacious gossip but stories that would illuminate the influences and inspirations in Bell’s long life in the theatre. 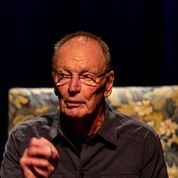 There are many ways in which one man can tell his tale. John Gielgud, dressed in a formal suit and with a voice that would seduce the Sirens, stood at a lectern with his huge book to present his Ages of Man. Emlyn Williams did much the same with his performance of Charles Dickens. David Suchet sat in conversation with Jane Hitchin, backed by digital projections of his life and work. Several of the great Knights and Dame Diana Rigg stood in a semicircle to deliver their characters in The Hollow Crown. I mention these examples, because I wanted more. But that is sheer bewitched greed. Bell could have well quoted Shakespeare’s Moor, You see me as I am, nothing extenuate. Not quite. This is Bell’s unpretentious modesty. We see him as a cavalcade of his beloved Shakespearian characters, presented with all the gravitas of tragedy, all the joyful absurdity of comedy and all the import of history.
One Man In His Time is a parting gift by a leading authority on playing Shakespeare who has enriched our love of Shakespeare and continues to do so with his nostalgic mirror up to the great Bard of Avon’s vast and colourful humanity.
Posted by Canberra Critics Circle at 12:18 PM