I had often heard, from true opera buffs, singers were now expected to act as well as sing, bringing new life to the opera houses of the world. Look at what Opera Australia has done on Sydney Harbour, they say.

So, from the start,  I looked forward with eager anticipation to seeing Peter Coleman-Wright's production for the newly-coined National Opera's “La Clemenza di Tito” in Llewellyn Hall in the hope that it would expand my appreciation of the art.

Quelle disappointment: look what they have not done in Llewellyn Hall, I might have replied.

My comments are based not on my prowess as a judge of what constitutes good opera, but upon my life-long experience in its more pragmatic relative, 'legitimate' theatre.

Admittedly, this production starts from well behind the eight-ball – trying to use a very good concert hall for a show that belongs on a theatrical stage.

Where were the elaborate sets? The magical scene changes? The flash lighting designs? The gorgeous costumes? Where was the pit in which the orchestra could create its undoubted musical magic without distracting the audience to the detriment of  the singers?

Canberra, the Heart of the Nation, lacks an opera house, so make the best of what's on offer. And, at least, we now have the 'National Opera' company. 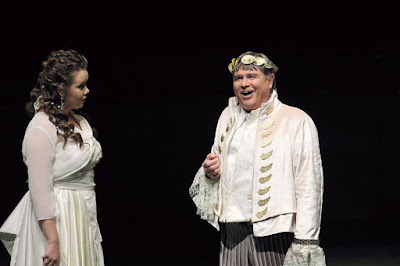 Wait a bit: we're a concert hall, so why not do it as a concert version of the original – that is, have the singers do their stuff in a line downstage,  straight to the audience, without having to bother about the convoluted plot or the dramatic relationship between the various characters. And they won't have to wear the tawdry mish-mash of costumes as if they were, severally, imitating life in the Roman Empire; Tito with a fringe of golden tinsel dangling over his backside; an ageing bikie with an eagle on his back; a couple of mixed-up adolescents in 20th century drag.

Wait another bit: let's make it something in between concert and full-on opera. The singers can still stay rooted on nondescript rostra we found out the back, so long as they follow the director's instructions: 'Don't just do something – stand there and sing!' and don't try to interact with any of the other people on stage.

Next, it’s in Mozart's original Italian. We could make a minor concession by projecting a one-line summary of each scene on the back wall for those in the audience who don't speak our language. Never mind full sur-titles – they'd spend all their time reading and not looking at or listening to our show. 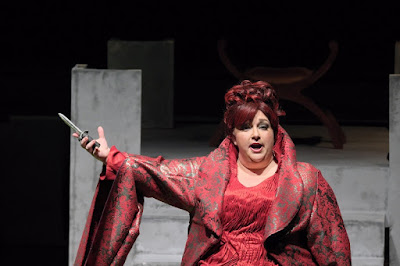 The singers' reputations came before them and the singing sounded good all round, as did the orchestra. In these times of needless amplification and body mics, it was a relief to hear the voices au naturelle.

The chorus, however, was over-disciplined and under-used, looking more like the local church choir than a Roman rabble – and everyone was rather too calm as Rome burned.

But look – there are still people around – in real jewels and black ties, who can do a standing ovation when it's needed at the curtain call –  such a pity that Llewellyn doesn't have a curtain.