ONE MAN IN HIS TIME - John Bell and Shakespeare. 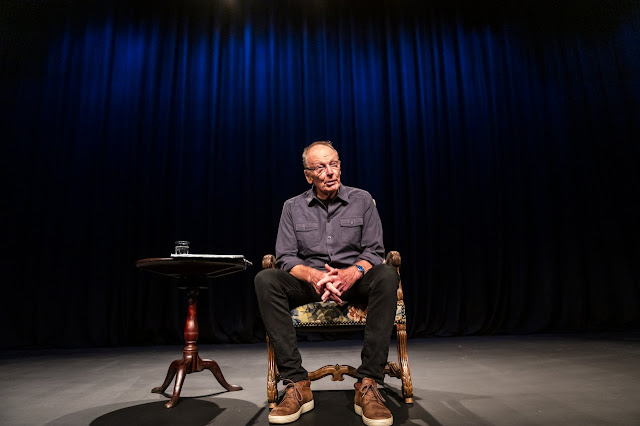 This is a show that should be seen by every aspiring actor, and everyone else with even a passing interest in theatre or Shakespeare. For a little over an hour, John Bell, consummate actor, superb raconteur and living national treasure, held his audience spell-bound with his mastery of his craft and the power of his story-telling, dressed simply in a smart grey casual shirt and jeans, alone on the stage, except for a chair and small table carrying a glass of water and a script to which he occasionally referred.

Commencing with Oberon’s monologue “I know a bank where the wild thyme grows” from “A Midsummer Night’s Dream”, Bell explained that this was the play that captivated him at the age of 15 and ignited his lifelong passion for Shakespeare and his writing.

He told how he studied Shakespeare from the age of 18 and performed his first “Hamlet” at age 22.  He shared some of the knowledge, explaining the difference between a speech and a soliloquy. He even gave some directorial hints enlisting some willing audience members to assist him in an engaging demonstration, for which he chose a soliloquy from “Macbeth”.

But mostly he talked about Shakespeare’s characters, and their relevance to present day circumstances and events. Hamlet’s “To be or not to be” to illustrate a point about suicide and “He hath disgraced me and hindered me half a million”, Shylock’s Act 3 speech from “The Merchant of Venice”, as a wry comment on recent politics.

Some quotes were familiar, others less so. Enthusing about Shakespeare’s lesser known characters, without the aid of any props, he effortlessly assumed character, to deliver Jack Cade’s speech from “Henry V1”; a hilarious exchange between Justices Shallow and Silence from “Henry 1V”; and Falstaff’s “Honour” speech.

After describing the meeting between Anthony and Cleopatra, he performed Cleopatra’s “Lament” with the reminder that in Shakespeare’s day all the female roles in his plays were played by men.

Crammed with similar examples, this gem of a show is no mere recital of Bell’s favourite roles.  More a memorable masterclass delivered with the freshness and enthusiasm belying a man in his 80th year, most of which have been spent sharing his enthusiasm for the work of William Shakespeare.

Of course there was a standing ovation from the capacity audience, as much to honour his outstanding contribution to the art of fine theatre as for his gift of this superb Shakespearean treasury.