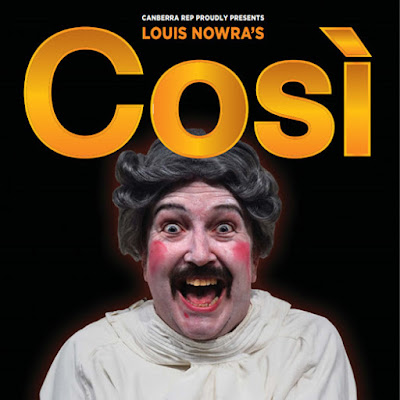 “Cosi” is a now iconic Australian play written by Louis Nowra.  First produced in 1992, this semi-autobiographical work drew on Nowra’s experiences working with patients in a Melbourne asylum in 1970.  It was a huge success at the time and was filmed in 1996.

In 1971, a young university graduate, Lewis, accepts a job to direct a play at a Melbourne health facility.  His plans for a simple one act play are scuttled by one of the patients, Roy, who insists they stage Mozart’s opera, “Cosi Fan Tutte”, even though no-one can sing.  Through this experience with the patients, Lewis develops a tolerance and understanding of other people’s views as well as unlocking his capacity for emotional involvement and gaining an insight into his own relationships.

Canberra REP’s new production is entertaining but uneven.  The strength of the show is in the performances by most of the actors playing the patients but the parts of the play involving Lewis’s friends from his student days, are less effective.  This makes Lewis’s insight and emotional growth less marked than it should be. 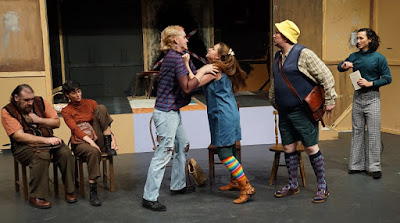 Director, Sophie Benassi, needed to monitor vocal performance levels better overall.  Too much shouting by some characters was wearying and others were hard to hear clearly.  The scene involving Lewis and the patient, Julie, was played much too softly to hear what they were saying, even though they were sitting on the floor at the front of the stage.

Steph Roberts and Max Gambale as the patients Cherry and Henry gave the most keenly-judged performances in the show.

The video projections for the patient Roy’s reminiscences were unnecessary and distracted from the actor.  Chris Baldock, who plays Roy, is a fine actor who could have carried those scenes without the projections. 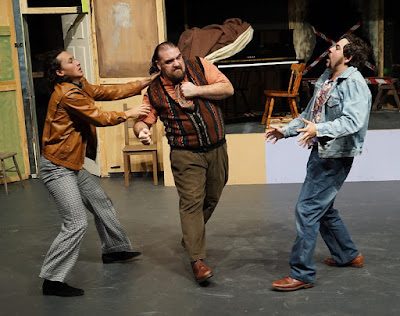 The set, designed by Andrew Kay, of a burnt out theatre is nicely atmospheric.  Costumes by Monique Doubleday give a suggestion of the early 1970s with bell bottom pants worn by the character, Lewis, as well as other touches.  The costumes for the play within the play are colourful and fun.

While the central idea of the play is still a sound and entertaining one, the director seemed to find herself in a similar situation to Lewis, the director in the play, struggling to bring all the elements of this show together effectively.