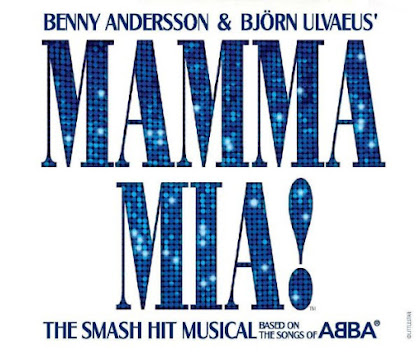 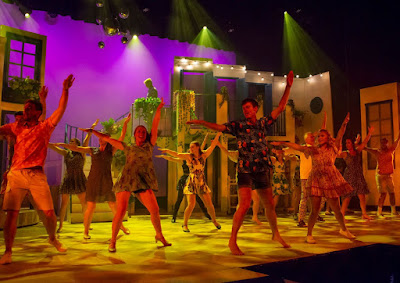 Mamma Mia!! What a show! For some years now, Free Rain Theatre Company under the astute leadership of Anne Somes has established itself as a leading local theatre company, entertaining audiences with high quality pro-am productions and most notably delighting audiences with professionally staged musicals. Their current production of the hit ABBA musical, Mamma Mia! is no exception and represents a fabulous coming out from the debilitating Covid-19 Pandemic. In a capacity audience on opening night, the urge to sing, dance and have the night of one’s life was irresistible. Eighteen months in the waiting, Somes has once again gathered together a familiar and formidable production team to ensure a night at the theatre that is sheer entertainment with a capital E.

Catherine Johnson’s book is essentially a plot line to hang the phenomenal ABBA songs onto. The plot is slight, but the segues to the popular numbers are cleverly devised and interpolated throughout the story. Sophie (Charlotte Gearside) lives with her single-parent Mum, Donna Sheridan (Louiza Blomfield) in their Greek taverna on a Greek Island. She is about to marry Sky (Will Collett) and would like to invite her estranged father to her wedding. Unfortunately, she doesn’t know who her father is, and can only go off her mother’s diary which suggests three possible suspects, Sam Carmichael (Isaac Gordon), Harry Bright (Mark Maconachie) and Bill Austin (Paul Sweeney) Somehow she discovers their addresses and invites all three to the wedding. Sophie’s old friends , Lisa (Jessica Gowing) and Ali (Meaghan Stewart) arrive as bridesmaids and Donna has invited her two former members of their band The Dynamic Duo, Rosie (Tracy Noble) and Tanya (Helen McFarlane) to support her at her daughter’s conventional wedding. Donna is her own woman and marriage was not a Seventies fad for Greek island ex-pats , but then the child is not always the parent’s clone. For the rest of the plot that twists and turns and runs the characters around in circles, you’ll have to get along to this uplifting, joyous and fun-filled romp.

And that is what makes this production such a top notch entertainment Every member of the cast and the band and pit singers are having the time of their lives. They are having fun and every moment is virulently contagious. It is impossible to resist those ABBA melodies from the sentimental I Have a Dream to the rousing Dancing Queen and the irresistible Gimme Gimme Gimme and the powerful defiance of Winner Takes it All and the list goes on. The company numbers rock. Under the direction of Jarrad West, the musical direction of Alexander Unikowski and the choreography of Michelle Heine, the stage explodes with talent and electric energy. An hilarious flipper routine is absolute absurdity, making affectionate mockery of male posing.

Gender power struggles run rings around the confusions and surprises that reveal dreams of the characters on the island. Sophie’s I Have A Dream, reprised at the end of the show charts the journey from innocence to experience. The Greek island serves as a metaphor for each character’s existential query “Who Am I?” The question drives Sophie, and every character through the course of the musical is compelled to make new discovery about themselves and what they want (Voulez Vous}. But then West’s production gives one little time to ponder such an existential conundrum. Free Rain’s Mamma Mia! rollicks along.. It is loud and brash, a truly Aussie version of expats who make their home on a Greek Island.. There are terrific performances from the principals and Blomfield’s Winner Takes It All blows me away. Gearside’s Sophie plays the young innocent beautifully and there are first rate performances from the principal women and the men. Only the miking needs a more subtle touch on the mixing desk. The miking heaps on the hype but if not carefully balanced mounts an assault on the ear.

Set, lighting and costuming are first class and don’t leave the theatre too soon after the curtain call, or you’ll miss Fiona Leach’s extravagantly costumed full company encore that is sure to have you dancing in the aisles. You’ll leavt his show on a high under ABBA’s magical spell with the tunes still ringing in your ears or humming on your lips.