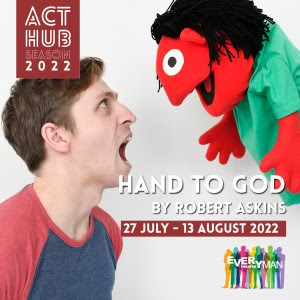 After sitting through so many worthy ‘issues’ plays recently in Canberra, it was a great relief to see a play that just entertains and makes you laugh.

Robert Askins’ play, first produced off-Broadway in 2011, takes place in the tiny, conservative town of Cypress, Texas.  Shy young Jason joins his mother’s Christian Puppet Ministry.  Struggling after the death of her husband, his mother tries to resist the amorous advances of both the town’s teenage trouble-maker and the creepy Preacher, while the young, attractive and refreshingly forward Jessica shows her feelings for Jason.  Tyrone, the puppet created by Jason, then declares that he is the Devil and leads everyone into sin.

Jarrad West and his cast have pulled all the stops out in this over-the-top farce.  It’s played at a furious speed and the cast all give terrific performances.  There are breath-taking moments including a performance of some of the famous Abbott and Costello routine, ‘Who’s On First’ by actor, Michael Cooper, with his puppet, Tyrone, a scene of frenzied sexual interaction by Steph Roberts as the mother, Margery, and Joshua Wiseman as the teenage troublemaker, Tim, that wrecks an entire room and another wild sex scene that leaves nothing to the imagination and has to be seen to be believed.

Michael Cooper as the shy Jason battling with his possessed puppet, Tyrone, leads the company with a remarkable performance that is highly comic but still grounded in reality.  His extraordinary vocal skills really bring that puppet to malevolent life.  Steph Roberts as the mother, Margery, displays excellent comic timing while playing probably the most courageous role of her career.

This is a very funny, outrageous play which requires strong direction and skilful playing vocally and physically to succeed.  The director, Jarrad West, and his fabulous cast have achieved this and made it a hysterically funny experience.

If you enjoy this as much as I did, you’ll probably go to hell, too!