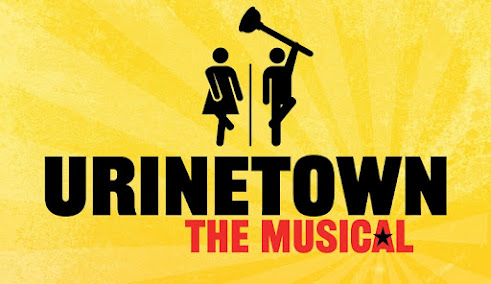 Book and lyrics by Greg Kotis

“URINETOWN”, the 2001 Broadway musical with the hard-to-sell title, tells the story of a drought that makes private toilets unlawful.  That story is just a framework for an evening of high satire.

Everything is fair game including the legal system, capitalism, social irresponsibility, bureaucracy and corporate mismanagement.  The musical form itself parodies other Broadway shows artfully throughout.

It might be a ratbag of a show, but it needs careful direction and strong playing to make it work.  Director, Ylaria Rogers, has gathered together an ensemble of 11 performers who have all individually proved themselves in past productions around town. It’s a high powered group with a skilled director who has guided it all with a sure hand.

Those cast members with the best songs stand out, of course, like Deanna Farwell who leads “It’s A Privilege To Pee”, Joel Horwood and Petronella Van Tienen with “Follow Your Heart” and Max Gambale who sings “Don’t Be The Bunny” but the power and fine singing of the group songs, “Look At The Sky”, “Run Freedom Run” and “I See A River” show how strong this whole cast is.  Their harmony singing was especially impressive.

Karen Vickery gives a nicely sly performance as the Narrator.  She also plays the policeman, Lockstock.  There’s been a gender swap with this role, which is the fashionable thing to do these days, but it was hard to tell until the end of the show if she was a tough female policeman or was playing him as a man.

This might have been obvious earlier if the poor sound balance of the first half hadn’t made it difficult to hear the dialogue and lyrics clearly.  Luckily, this problem seemed to have been sorted for the second half of the show and should hopefully be fine for the rest of the season.

Musical direction by Leisa Keen was excellent and the small band with Keen on keyboard herself played with skill and gusto.  There was witty and appropriate choreography by Annette Sharpe which the cast performed very well.

This is a fine, small-scale production of a sharply satirical musical.  Don’t be put off by the show’s title, enjoy spotting the satire and the musical references and you’ll have a great time with this.

This review was first published in the Canberra CityNews digital edition of 25 July.