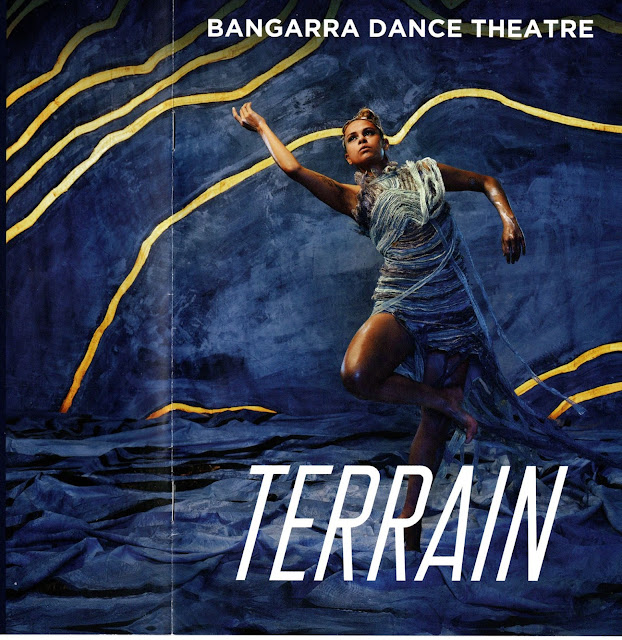 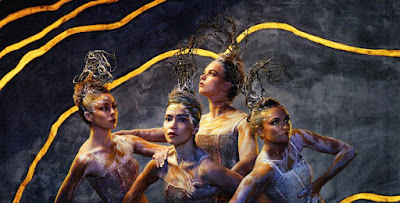 For the first 1 minute of 60 minutes, the stage backdrop is ghastly, bright, flat, white light: the last 234 years.  Fade to black for more than 60,000 years: a small circle of sunlight begins to reveal the First People.  Their story says ‘Always Here; Always Will Be’.  Terrain is from the heart.

A friend said he would have liked it to begin with an aerial photo of “Lake Eyre – Kati Thanda – [which] is one of the largest lakes in the southern hemisphere.  The monsoonal rains off the coast of Queensland travel down through the Channel Country spilling into South Australia’s Lake Eyre basin which is 9,500 square kms.  Uncle Reg Dodd, an Arabunna elder, told me to tell the story of Country from our urban perspective.” (Frances Rings Reflects on Terrain).

But I know, as the backdrop changes with the development of the people, that this art is not a romance needing a pretty picture to begin.  We who are not First People need to know the truth of these blank white years.

In that very Channel Country “The careful time-honoured ecological balance was drastically disrupted by the arrival of large cattle herds, which crowded around and polluted accessible waterholes and billabongs.  The Kalkadoons raided the pioneer stations, spearing cattle and retreating into the rugged hills.  When stockmen and miners [at Cloncurry] were killed, the Native Police were called in.  The first punitive expedition was carried out in 1879 [101 years after the invasion began] in response to the killing of a stockman called Molvo.  But the low-level conflict continued, accompanied by persistent demands from cattlemen and the townspeople in Cloncurry for further police action….

“Their opportunity to take revenge came when the Kalkadoons killed the well-known station owner JW Powell…. ‘For every one of [his] poor bones / A Kalkadoon shall die’…. The punitive campaign ended in September 1884, when the troopers caught up with a Kalkadoon band on a rugged hill that came to be known as Battle Mountain…. [It is estimated] that in the punitive expeditions between 1878 and 1884 at least 500 Kalkadoons died and the toll may have been as high as 900.” (Henry Reynolds: Forgotten War, page 204-5, revised edition 2022).

It’s now ten years since I saw the original performance of Terrain, (reviewed on this blog September 13, 2012).  I didn’t note the white beginning then, but Reynolds’ updating of his 2013 history has changed my ‘urban perspective’.  Reynolds ends his book with “ When considering war overseas, Australians are admonished to remember forever those who did not return.  ‘Lest We Forget’ is not so much a phrase as a sacred incantation.  It provides the guiding spirit for the miscellany of monuments at the eastern end of Canberra’s Lake Burley Griffin in and adjacent to the Australian War Memorial….  On the other side of the lake Reconciliation Place manifests a very different attitude to Australia’s own wars.  The guiding phrase there is not ‘Lest We Forget’ but rather ‘Best we forget the conquest’.”

I wrote very positively in 2012: “David Page and Frances Rings, speaking at the pre-show forum, said that dance is its own language, so it is difficult to explain in words.  The best I can do is to describe Terrain as a symphonic poem in nine movements, however trite, old-fashioned and European that sounds” and compared the quality of the art  of Rings and Page with that of greats like Brahms, T.S.Eliot and Jackson Pollack.

The international recognition of Terrain since then, and the performance I saw today, fully justifies such comparisons.  But what an ‘urban perspective’ that was.  Today I sadly felt the absence of David Page, whose passing still haunts me, especially when absorbing the sound he created with Frances as she choreographed this artwork for and by the oldest continuing culture on earth.

For Frances Rings, soon taking on her role as Artistic Director of Bangarra Dance Theatre from David’s brother Stephen as he retires, opening with Terrain is a triumph.  It will surely play its part in changing Reynolds’ concluding fear that “The process of reconciliation may have brought some people closer together, but white history and black history are as far apart as ever.”

Voice, treaty and truth is the future. 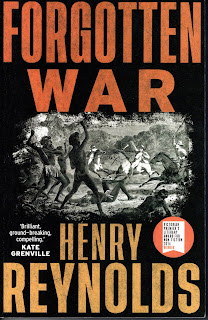