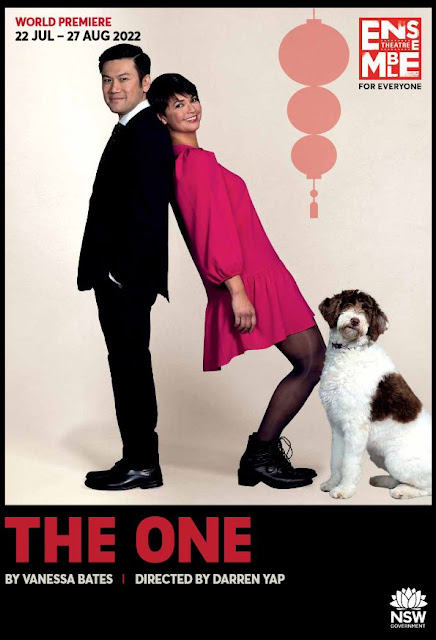 In this new play by Vanessa Bates, the story of The One is complicated – in the right sense for comedy, but equally seriously for people coping with living between cultures, of different kinds.  Multiculturalism is not always so amusing when it’s all in one family.

In Act One the play is clearly written to be funny – and it is.  But you may sense there’s something odd about the brother, Eric, and his seemingly dominating sister, Mel; about Mel’s relationship with her boyfriend Cal – which began when they appeared together on a reality ‘Getting Married’ TV show; and about what they all think of Eric and Mel’s Malaysian mother, Helen.

That’s all complicated enough until Jess, the Chinese waitress now running Jim’s Oriental Restaurant, blasts her way into the younger one’s attempt to take Helen down memory lane – not to celebrate her birthday but, as she says, to celebrate her survival.

But then, if you felt just a bit tentative about why you were laughing in Act One, Act Two, focussed around the lazy susan of what might have been an Aussie Chinese restaurant celebration, jumps up to an unexpected – and terribly funny – level of absurdity until, equally unexpectedly, laughter at becomes empathy with each member, each one, of this complicated family.  In particular, what will Mel decide about her future with Cal, considering what happened about the children’s father?

Vanessa Bates’ writing is highly original because she takes the risk of sitting on the knife-edge where the absurdity of reality is at the same time devastating and comic.  Director Darren Yap and his design team match the author’s originality in every way – in the use of video, props and stage furniture, choreography (when 9 and 12 the brother and sister had won an Australian Asian Ballroom Dancing competition!); not forgetting make-up, hair and costume (for Eric in particular) – and especially the creation in sound of the final central character, Fifi / Spike: Helen’s dog, who is The One who really matters.

The community feeling which is the mark of Ensemble Theatre becomes part of the play as we find ourselves being the characters’ audience as well as the actors’ audience – another risky but clever device by Vanessa Bates.  So even while Australians’ racism is exposed, the curtain call is a celebration of the real culturally-mixed cast of quite extraordinary performers.

Another Ensemble success not to be missed.