HAND To GOD by Robert Askins.

Depending on your sense of humour Everyman Theatre’s production of Hand to God will either have you laughing until you cry or crying until you burst into uncontrollable laughter. It’s a blasphemous devilishly outrageous black comedy.  The guffawer will split his, her or their sides at the rude retorts of the rebellious puppet Tyrone. The giggler will find the sexual antics of mother Margery and yobbo Tim hilariously ribald. But the more restrained subtle smiler will simply smirk with secret delight  at the absurd members of the local church ministry puppet club. If however, you are prone to shock and indignation, then this wonderfully clever, and an absurdly Pandora’s box of all your private fascinations is certainly the place to revel in your unabashed catharsis.

Under Jarrad West’s sure fire direction, an outstanding cast crash their way through the mayhem and madness created by renegade Tyrone, a puppet with a penchant for splurting out the subconscious devilish thoughts in meek and mild Jason’s head. What ensues is a full on battle of will between Jason (Michael Cooper) and the thoroughly uncontrollable Tyrone.  Jason's mother Margery (Stephanie Roberts) battles her own demons and repressed instincts after the death of her husband.  That is until her wild demons are unleashed in a fit of sexual abandonment by yobbo Tim (Josh Wiseman) much to the blushing embarrassment of sweet Jessical (Holly Ross) and the envious disgust of Pastor Greg (Arran McKenna)

Id and ego explode in Everyman’s riotously staged production of Robert Askin’s volcano of irreverence. The Devil is in the detail and he is playing havoc with faith, morality and suppressed self-deception. It is time for the truth to be revealed and Tyrone is no gilded lily under the puppeter’s control.  In an eruption of subconscious revelation, hypocrisy and hysteria  let fly in a flood of crudity and instinctive honesty. West is the master puppeteer of the business, playing the strings with wizardly directorial skill. There are so many moments of sheer hilarity as Jason unwittingly unleashes his truth weapon, Tyrone. The inexpressible attraction between the innocent Jessica and the shy Jason is just one of the magical moments in West’s production as Tyrone and Jessica’s Joelle turn the Karma Sutra into a diplay of gymnastic athleticism and Margery unbottles her dispensary of erotic seduction.  Pastor Greg’s attempts at exorcism prove as laughably futile as sticking a pin into a brick wall. By the time the production ends, any guffawer will be drained by the endless paroxysms of laughter. And for those who merely smile, admit it. You wish that you could have let your personal Tyrone loose at times – lots of times!

West’s cast handles the pace, the timing and the business with expert applomb. ACT HUB is forging a reputation for providing the very best in first class theatre and Everyman’s Hand to God is no exception.  In a cast that works so well together and handles the play’s Southern accents with authenticity, it is worth singling out Michael Cooper’s performance as Jason and Tyrone. His brilliantly orchestrated shift from Jason’s meek voice to the rumbling, threatening growl of Tyrone is a master class in dual characterization. It is obviously recognized by a tightly woven cast that acknowledges Cooper’s singled out bow at the curtain call. 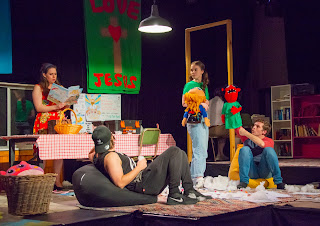 Playwright Askins reminds us of the complexity of human nature and the peril of blind acceptance, false idols and painful suppression. The comedy may be black but the moral is gleaming white thanks to Tyrone, whose manner may be brash but at least you know on which hand you stand.

Everyman Theatre’s Hand to God is a night out that you would be sorry to miss. This is the most outrageously  funny and discerningly honest play that you are likely to see this year. Let your Tyrone loose and hand it to God. You’ll be glad you did!.