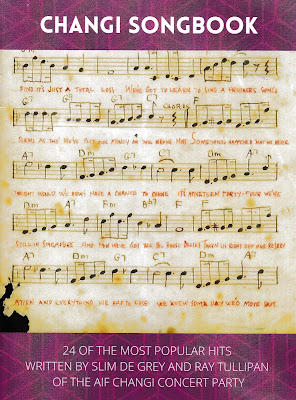 The name Changi is synonymous with the suffering of Australian prisoners of the Japanese during the Second World War.  Those incarcerated proved to be resourceful in many ways, including creating shows to lift the spirits of the men.  While suffering from hunger and other privations, a highlight of a POW’s week were the shows produced and performed by the AIF Changi Concert Party.

Slim De Grey and Ray Tullipan wrote many songs for these shows and, after the war, 24 of the most popular songs were made available in the “Changi Songbook”. Copies of these books were sold to the POWs and were so beloved by them that they are difficult to buy to this day.

As part of the “Flowers For Peace” project, the director, Christopher Latham has arranged for all 24 of the songs to be recorded for the first time.  For one performance only, the singers and musicians involved in the recording presented an informal concert evening of these songs at the Street Theatre.

The narrator, Neil Pigot, spent an enormous amount of time with members of the concert party in the 1990s learning their performance style and recording half of the songs with them.  He was joined in singing them by Andrew Goodwin, tenor and Tobias Cole, baritone.

Between the songs, Neil Pigot presented background information about the concert party members and life in Changi.  While there were humorous stories and jokes, there were also many sobering stories of the difficulties faced by POWs in the prison.

The songs, with titles such as “Swingaroo”, “A Tea Cup Romance” and “Just A Bungalow Called Home”, are classic examples of light-hearted, romantic songs of the war era.  There were some nicely catchy tunes and the singers clearly enjoyed performing them.  The audience responded with spirited applause at the end of the show.

Following this recording project, nine of the songs will be featured in the “POW Requiem”, part of the “Flowers Of Peace” project, which will be performed on 29 October.

This review was first published in the Canberra CityNews digital edition of 29 July 2022.