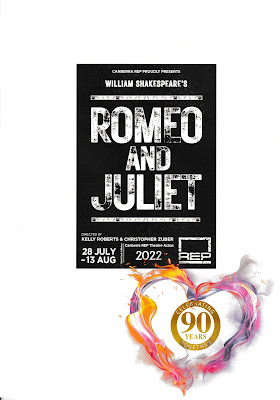 William Shakespeare’s “Romeo and Juliet”, first published in 1597, is probably the most well-known of his plays.  The romantic tale is constantly staged and has been filmed more than any other Shakespeare play.  Sergey Prokofiev composed the music for a ballet version of the play that has also retained its popularity to this day.

So popular is the play that tourists, carried away by the romanticism of the fictitious story, make a beeline for an alley way in Verona where they wrongly think the famous balcony scene of the play actually occurred.

With this level of identification with the story, audiences for the play expect to be carried away by the romance of “the star-crossed lovers”.  This puts considerable pressure on directors and casts to meet an audience’s expectations.

This new production by directors, Kelly Roberts and Christopher Zuber, pares the play down to two acts and has a cast of 14.  The role of Mercutio, normally a male friend of Romeo, has been gender-swapped for this production.

Although the elaborate setting for this production evoked the old city of Verona with the warm, golden glow of its old walls and archways, it was rather stark and overpowering at times.

The dialogue and playing had a present day sensibility.  The poetry in the text seemed to have been mostly ignored in this production.  The actors spoke much too fast and their diction was not clear enough.  It was often doubtful that they had more than a surface understanding of the lines they were delivering.

There was little chemistry between the characters of Romeo and Juliet as played by Pippin Carroll and Annabelle Hansen.  It did not help that the setting for the balcony scene made it look as if Romeo was delivering his lines from the bottom of an empty swimming pool.

As the playing lacked any real romance as the story unfolded, it was not possible to feel much emotional involvement in the tragic ending of the two lovers.

This review was first published in the Canberra CityNews digital edition of 30 July 2022.

Posted by Canberra Critics Circle at 8:46 AM