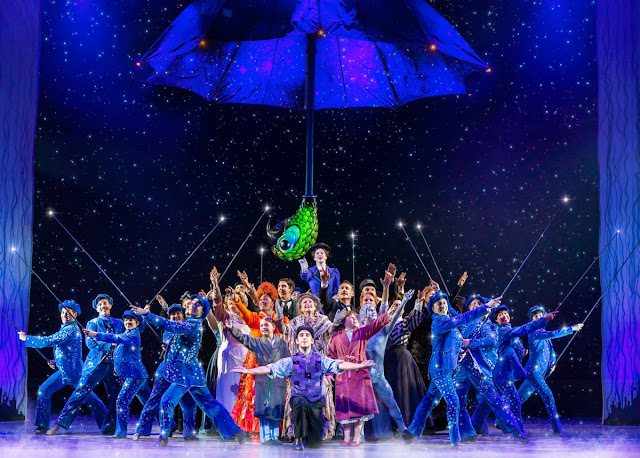 My first encounter with this production of “Mary Poppins” in 2011 is a treasured memory only partly because it provided me the opportunity to meet and interview the co-creator of the musical, Cameron Mackintosh. James Powell was charged with adapting Richard Eyre’s original direction for the Australian production which starred Verity Hunt-Ballard as Mary Poppins and Matt Lee as Bert supported by an all-star cast which included Phillip Quast, Marina Prior and Judi Connelli. I remember it as a joyous production.

In 2015 I saw another production of “Mary Poppins”. This time an excellent pro-am production by Free Rain Theatre in the Canberra Theatre for which director, Stephen Colyer, lacking the bells and whistles of a full professional production, still managed to capture the inherent joy of the musical, with a talented cast in which Alinta Chidzey, currently starring as Satine in “Moulin Rouge”, was a delicious Mary Poppins besides Shaun Rennie’s delightfully cheeky Bert.

So what does “Mary Poppins” have to offer audiences in 2022?  Well quite a considerable amount as it turns out.

Again James Powell is at the helm of the Australian production, and  rather than just re-producing his very successful 2011 production, he’s taken advantage of advances in theatre technology to gild the lily with even more awe-provoking theatrical magic guaranteed to drop the jaw of even most cynical theatre goer.

But it’s not only the theatrical effects that make this production memorable. Stefanie Jones is a very spit-spot Mary Poppins, who arrives uninvited and who immediately installs herself as the nanny of the Banks children,  Jane and Michael.  At this performance, Jane and Michael Banks were delightfully portrayed  by 11year-old, Mia Honeysett and 12 year-old scene- stealer, Ben Stabile.

Jones with her crystalline clear singing voice and commanding stage presence is perfect casting as Mary Poppins. She states her credentials in “Practically Perfect” and “A Spoonful of Sugar” and takes her charges on a “Jolly Holiday”, encourages kite flying,  and confidently leads the whole company through the frenetic staging of “Supercalifragilisticexpialidocious”. 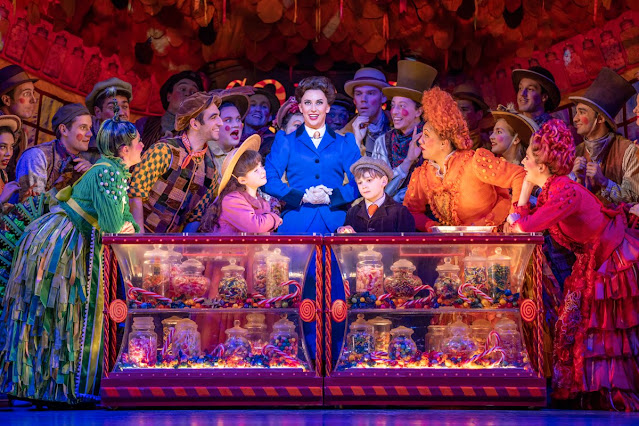 However at this performance she tended to aim her performance over the heads of the audience and had very little eye-contact with the other cast members, so that her Mary often appeared conceited and self-centred.  This might be deliberate and in keeping with P.L.Travers’ descriptions of Mary, but hopefully a little more warmth might find its way into her characterisation as her performance matures.

Jack Chambers as Bert, on the other hand, was charm personified, a brilliant dancer and totally captivating in “Jolly Holiday” and particularly when executing a dance routine up-side-down around the theatre proscenium.

At this performance the roles of George and Winifred Banks were played by understudies, Stephen Anderson and Genevieve Kingsford. Both, understandably, took a little time to settle, but gained confidence as the performance progressed, found their level and offered charming renditions of “Being Mrs Banks” from Kingsford and “A Man Has Dreams” from Anderson.

Hannah Waterman as the long-suffering, mouthy housekeeper, Mrs Brill and Gareth Isaac as her gangly offsider, the butler, Robertson Ay offered polished comedic performances.  The audience roared its delight when Chelsea Plumley, unrecognisable as the formidable Miss Andrew, received her come-uppance from Mary, while veteran Robert Grubb was clearly enjoying his multi-casting as Admiral Boom and the Chairman of the Bank.

Almost stealing the show and definitively demonstrating the old adage that there is no such thing as a small role, stage legend Nancye Hayes, luxury casting as the bird woman, had many reaching for their tissues with her touching performance of “Feed the Birds”.

Magical production numbers performed by dancing statues, colourful costumes in lolly-shops, Wonderful pop-up storybook houses to live in, glittering chimney- sweeps dancing over rooftops on a starry London night, and even Mary Poppins herself flying out into the theatre right over your head,  “Mary Poppins” has it all.

It’s the kind of show that makes you want to rush out and gather up every kid in the neighbourhood to experience the joy and wonder of live theatre. That’s what “Mary Poppins” is offering in 2022.