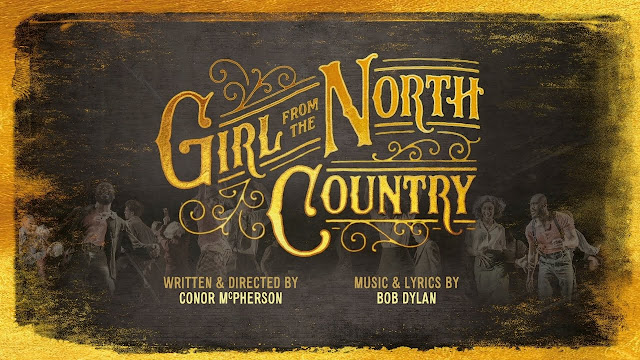 Written and directed by Conor McPherson

Music and lyrics by Bob Dylan

What is extraordinary about “Girl From The North Country” is that the songs’ composer, Bob Dylan, gave free access to his entire song catalogue without restrictions to the producers to develop the musical.

Bob Dylan has sold more than 125 million records since the 1960s.  His songs include some of the most popular songs of all time.  He was awarded the Nobel Prize for Literature in 2016 for “having created new poetic expressions within the great American song tradition”.

The musical first opened in London in 2017 and ultimately played a total of 175 performances on Broadway, closing in 2022.

Set in a rundown guesthouse in the winter of 1934 in Duluth, Minnesota during the Depression, the story focusses on the lives of a number of people who are thrown together at a moment in time in that location.  Writer/director, Conor McPherson, has used Dylan’s songs to create atmosphere and illustrate the thoughts and emotions of the characters in the story.

Rae Smith’s scenic design of highly detailed moving panels that glide in and out and up and down as well as a subtle use of projections nicely creates the mood of the time and location.  The complex lighting design by Mark Henderson adds another atmospheric dimension to the show.

There are a large number of characters in complex relationships and the cast talk fast in unfamiliar Minnesota accents.  You have to listen carefully to keep up with the intricacies of the storylines.

The band, led by Andrew Ross, plays the score very well.  Some cast members also play instruments in the show.

The overall star of this show is Simon Hale who produced the excellent orchestrations and arrangements of Bob Dylan’s music.  Taking Bob Dylan’s songs and arranging them in theatrical terms would have been a daunting task.  It’s not surprising that Hale won the only Tony Award that the show received for “Best Orchestrations”.

Because of the way Bob Dylan’s music is used in this show, it’s not strictly a jukebox musical.  Simon Hale’s arrangements and Conor McPherson’s use of the songs give Dylan’s music an unexpected and pleasing dimension.  It’s an enjoyable and refreshingly different Broadway show.

This review was first published in the Canberra CityNews digital edition of 27 August 2022.

Posted by Canberra Critics Circle at 7:40 AM