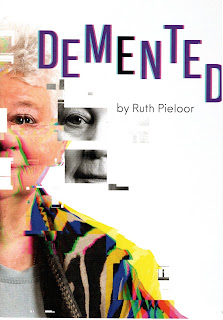 Demented is an unusual play in two parts.

Before interval Maggie’s ‘clown’ personality (she claims to have been a trapeze artist in her time), now seriously affected by the onset of dementia, is represented in a seemingly light-hearted manner.  She seeks our attention and laughter as a character; while the ever-changing of the set around her is carried out by apparently circus performers, who morph into her daughters and grandaughter.  Underpinning the superficial comic behaviour, we sense that Maggie’s life, from her point of view, is lost in confusion as conflicting or entirely irrelevant memories are stirred in a setting she no longer properly understands.

This is the premiere of a brand new play, with an enthusiastic opening night audience including many, I’m guessing, who were close to its development and the people on and behind stage.  I found at interval I now had a picture of Maggie, but not yet a story-line to suggest where the play might go from that point.  Of course, from my own personal experience following my own mother’s transformation and final death, I could see the inevitable end.  But theatrically, I felt I needed a stronger sense of dramatic possibility to end Act One.

However, in Act Two, the drama does develop through what happens to Rachel, Kat and Emily.  The use of the puppet, which had been intriguing in Act One as an illusion of Maggie’s memories of Kat, expanded to represent all three, Rachel, Kat and Emily, not only for Maggie but for themselves in the next generations as well.  Maggie dies after the expected awful process of leaving her home for a palliative care facility, but we are left with the positive proof of love from woman to woman across the generations – and also with the understanding that dementia, especially perhaps more for early-onset dementia, has a strong genetic component.

It comes down to a simple question from a gerontologist: are you lost and unable to find your way out of the shopping centre and back to your car?

So the story-line of the play is for us to come to realise that dementia, in many families, may be inherited and also very unpredictable.  This play emphasises the love needed to cope with that insecurity across the generations of women; and I would like to add that early, and late-onset dementia in men is equally difficult.  Perhaps there’s another play to be written in parallel to this Demented.

The production of Demented is interesting to see in its own right.  The variety of acting skills needed by Heidi Silberman, Rachel Pengilly and Carolyn Eccles – as  highly athletic comic big-top performers; as well as the daughters/grandaughter at different ages dealing with each other and their mother/grandmother; and as operators of the puppets – were a joy to watch.

The set design and construction, with large rollable and reversible walls and a range of other props and furniture were a tour-de-force both before during construction and during the performance for Mel and Lachlan Davies (I hope I’m right in assuming they are related – they certainly worked together remarkably well).

And lighting and sound were effective and complicated, especially through the rapid changes of short scenes in Act One, and taking us through to the quietness and slow dim-out of the emotional ending of the play.

Finally, I think it is important to recognise the work of Chrissie Shaw, with a long history especially in women’s theatre, in presenting the role of this particular dementia sufferer, Margaret, who thinks of herself as Maggie with a special connection to the black-and-white bird, the Australian magpie – and even reproducing (sort-of) its impressive song!  A positive note to remember.  A Q – cue? – for the Locals to also thank Jordan Best, The Q’s Artistic Director, for her practical encouragement of new writing.

Posted by Canberra Critics Circle at 11:46 AM