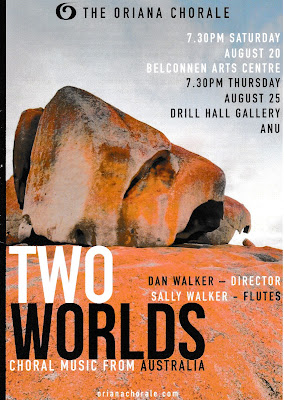 The Oriana Chorale’s new concert, “Two Worlds” is inspired by the words of Alice Eather, an Aboriginal Australian poet, environmental campaigner and teacher from Arnhem Land in the Northern Territory.

In her poem “Yúya Karrabúra” (Fire Is Burning), she refers to her dual heritage of First Nation peoples and Europeans as the two worlds she walks between, saying, “I’m living and breathing this story of black and white”.

Chorale Director, Dan Walker, created a choral work from Eather’s poem and it was one of the works presented in this unique concert in the Gallery at the Belco Arts Centre.

A new work, “Clock”, by Christopher Sainsbury and Darryl Griffen, a modern response to climate change, was commissioned by the Oriana Chorale and given its world premiere in this concert.  It was a beautiful, thoughtful work with dramatic moments contrasting with hints of sadness and reflection but ultimately optimism.

It was an impressive achievement by Dan Walker and the Chorale singers to present such a wide-ranging program, most of it in the original languages of the works.  It was sung with confidence and clarity throughout.  The unfamiliar and constantly shifting rhythms and parts would have been a challenge to learn and sing.

The result was an evening of fine singing and an educating insight into the astounding range of music to be found in First Nation cultures.  There were rousing, chanting works throbbing with life and joy, melodic works of great beauty, quietly dramatic works of sadness as well as surprising moments of cheeky humour.


Flautist, Sally Walker, gave beautiful solo performances of “Ulpirra” and “Water Spirit Song”, both by Ross Edwards, and added an extra element of emotion to works performed by the singers, including the exquisite “Lullaby From Requiem” by Peter Sculthorpe.

Stephen Leek’s “Great Southern Spirits” a fabulous soundscape of ancient Australia was the perfect finale for the program.  Its vivid final section, “Uluru”, which conjured up images of thoughtless tourists on the sacred rock, brought Alice Eather’s plea for continuing dialogue full circle.

This review was first published in the Canberra CityNews digital edition of 21 August 2022.