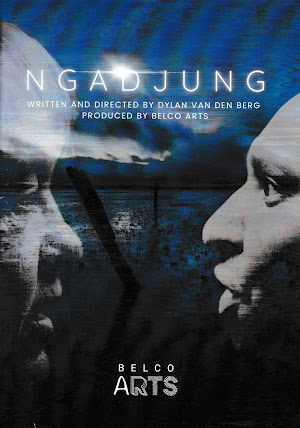 This environmental drama, set in a dried up, desolate and bleak Ngunnawal Country of the future, brings two unlikely women together.  There is no natural water in the world.  Only a synthetic liquid sold by an all-powerful giant company is available to quench thirst.

The older woman, Flick, is digging in a dried up river bed.  The younger woman, Cass, is running from something in the city.  Thrown together in an uneasy relationship, they find it necessary to get along when a search for Cass by the all-powerful company threatens their existence.

This nightmare world of warning for our environmental future is a framework for the real focus of the story – the relationship between the two women.  Cass, from the city, is young, intelligent and has always relied on computers to guide her life.  Flick is from the land and knows its history and hidden resources.  The difference between the two women is heard in Cass’s exclamation, ‘I don’t want to look, I want to know’.

In an impressive first directorial effort, Dylan Van Den Berg has obtained good performances from his two cast members, Lisa Maza (Flick) and Kylah Day (Cass).  The show is well-staged and tightly paced and the design aspects of the production have been realized very well in conjunction with his technical team.


Imogen Keen has produced a starkly beautiful set design and Linda Buck (lighting) and Peter Bailey (sound) have given the production an effective and immersive sound and light design with some startling effects that work well.

The strengths in Van Den Berg’s writing are his development of characters and his ear for natural dialogue.  Both elements are successfully employed in this play but there was no in-depth exploration of the cultural attitudes to water and the environment that the play seemed to promise at the beginning.

The story unfolding between these women was intriguing until the threatening helicopters arrived and the dystopian thriller aspect of the story was revealed. It then followed a well-trodden Hollywood formula (Mad Max was probably just over that hill!)  There was even the obligatory twist in the story at the end affecting the logic of much that had gone before.