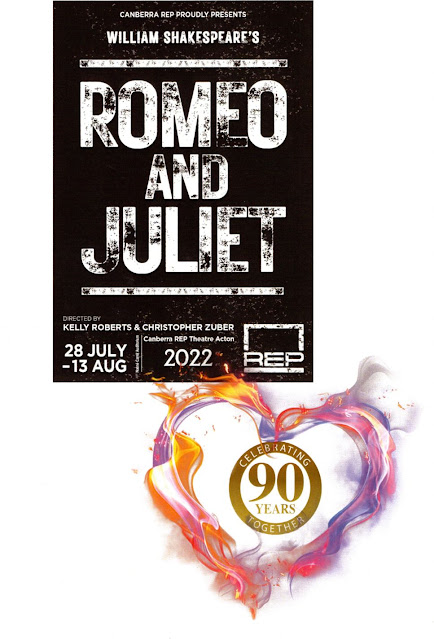 The directing and design concept of Canberra Rep’s Romeo and Juliet is original and very successful.  The set design is a good place to begin to understand how and why.

Starting perhaps from Shakespeare’s placing the play specifically in Verona, this image of colonnades is about city life where action is constrained by the spaces between, around and behind walls.  Conflict is easily generated between houses literally; or between “Two households, both alike in dignity” as the Prologue says.

How ‘dignified’ are they when the Prince must report “Three civil brawls, bred of an airy word, by thee, old Capulet, and Montague, have thrice disturb’d the quiet of our streets”, threatening “If ever you disturb our streets again, your lives shall pay the forfeit of the peace.”

The moving of the seeming solid walls and doorways, on secret silent rollers, becomes a character in the play itself.  The unadorned style contrasts symbolically with the often too, too florid language – in anger, say, when old Capulet will make his daughter be married to Paris; in irresponsible fun from Mercutio; in fury because of so-called insult from Tybalt; from Romeo on first sighting Juliet:

“It seems she hangs upon the cheek of night
Like a rich jewel in an Ethiope’s ear;
Beauty too rich for use, for earth too dear!”

The acting matched the hard-edge scenery in what I would call ‘presentational’ style, so that the audience is kept at some distance from the emotional experiences of the characters.  As the first act was ending I felt a bit concerned that – though it was working very well for the storytelling, often with a sense of comedy – the second half would need to change gear.

And this was done very well.  The opening after a relaxed interval went immediately into the horror of the young people actually knifing each other.  Using a kind of ‘modern’ dress and dispensing with swords was powerful.  I had at first some qualms about Mercutio being played by a woman – whose wit was certainly up to the mark – but when she stabbed and was stabbed, the feeling was awful to watch; and then more than justified Romeo’s defence of her and his killing of Tybalt.  From here on, the seriousness and depth of feelings were established right through to the dreadful end.

The casting was well balanced.  Appropriately no roles were allowed to become ‘star’ parts, though it would be unfair not to mention Tracy Noble’s frantic nurse trying so hard to keep everything together; and the rather surprising Friar Lawrence as played by Ryan Street – sometimes quite wildly almost ‘losing it’, frustrated with these people, rather than being the more usual philosophical adviser.

Overall, then, this is a realistic Shakespeare – a picture of social dysfunction, when love is not allowed to have its proper place.  Despite old Capulet and Montague shaking hands and talking of a golden statue to commemorate Juliet, this production made the final lines feel like the truth we can never avoid:

For never was a story of more woe
Than this of Juliet and her Romeo.