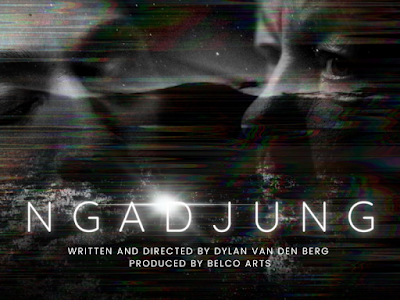 
On entering the Belconnen Arts Centre theatre, I am immediately struck by Imogen Keen’s starkly barren design of arid brown earth and spindly lifeless tree trunks that form the setting for Dylan Van Den Berg’s latest play Ngadjung. We enter a landscape of the future sucked dry of water. In this post-apocalyptic environment, ravaged over centuries of colonization by bushfires and droughts synthetic water is now bottled by a monopolistic conglomerate, Wetco. Bent over a large hole, Flick (Lisa Maza) forces her shovel into the parched earth in search of fossils and the river that once flowed freely through country. Riverways are the lifeblood of First Nations people, inextricably linked to their history and their stories. Water (Ngadjung) is the source of all life, placed in catastrophic peril by political ineptitude and abject denial of the consequence of inaction on indisputable climate change. Van Den Berg’s hauntingly prophetic and provocative play presents a grim prospect that may even now be too late to remedy.
Into Flick’s country stumbles Cass (Kylah Day), an employee of the security section of Wetco. Cass, determined to seek out a solution to the lack of real water, is fleeing with important data, exposing Wetco’s  corporate monopoly and greed. The gift of the storyteller courses through Van Den Berg’s play. He deftly establishes the intergenerational conflict between the young, naïve idealist and the fiercely independent survivor. And yet both share a cultural legacy. Cass treasures the possum skin and broken umbrella, from her late grandmother. Flick clings to the spirits of her deceased mother and sister  and the resolute search for the river that ran through the dry ground. Both women share a quest for self preservation of culture, heritage and their indigenous history Both cling to the hope of a  future when real water may once again flow through the waterways of the land. To this extent Ngadjung offers hope and yet in the closing moments of the play it appears to be Wetco that triumphs. It serves as a chilling warning. Belco Arts have scored a triumph in commissioning the award winning Van Den Berg to write a play about water and environmental sustainability. He has done so much more than this. Ngadjung is a play about opposing forces, cultural, historical, social and political. The play is harshly critical and rightly so of the colonizers’ failure to understand and care for the land and the First Nations people who are inextricably tied to country. Cass’s attempt to thwart Wetco appears to fail. Or is this the warning that may give rise to action? Is there to be no happy ending to Van Den Berg’s prophetic prediction?

Ngadjung is an extraordinary work by a playwright with a prophetic gift for storytelling. It is made even more extraordinary by the team who have brought Van Den Berg’s vision to life.  Lisa Maza gives an exceptional performance as the resilient, fiercely independent and determined Flick. She has a deep spiritual connection to the moon and the land in spite of or because of the desolation wrought by ignorance and mismanagement. Kylah Day in her theatrical debut is thoroughly convincing as a child of the city, yet instinctively compelled to preserve and restore the natural order of her indigenous heritage.  Director Van Den Berg, mentored in his inaugural role as director of his own work by the highly experienced Rachael Maza, elicits performances that are thoroughly individual and totally  convincing. Cultural advisor Dr. Caroline Hughes informs the cultural significance of the work and the truth of the symbolic nature of the production. Every element of production evokes a powerful response, captured by Linda Buck’s striking lighting design and Peter Bailey’s riveting sound design. The heightened impact of sound and lighting conjures the chilling presence of the Wetco helicopter and the mystery of Country. This is a production where all elements create a harmony of visceral response. 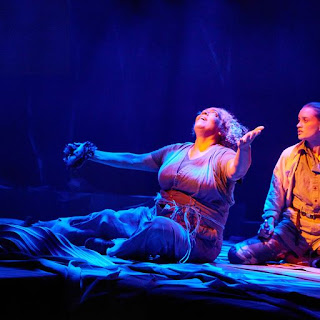 In the end we are left with an urgent need for action. It is far past time to heed the wisdom and the voice of the country’s First Nations peoples. Ngadjung forewarns of an impending doom but offers a glimmer of hope with Cass’s survival and awakening.

Award winning Van Den Berg emerges as one of Australia’s most significant playwrights. Belco Arts’ wonderfully professional staging of Ngadjung mirrors the enormous success of the Street Theatre’s production of Milk and Van Den Berg’s place in the highest echelons of Australian playwrighting is assured. Ngadjung, along with Milk have rightly earned a place on the mainstages of Australian theatre and in every school library. Ngadjung is must see theatre at its best, a cry for action that can not go unheeded.