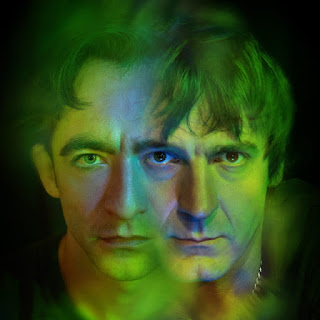 Strange Case of Dr.Jekyll and Mr.Hyde 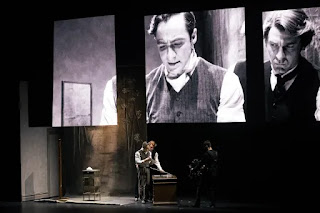 The promotional slogan for Sydney Theatre Company’s   Strange Case of Dr. Jekyll and Mr. Hyde offers a certain indication of Kip Williams’s adaptation and staging of Robert Louis Stevenson’s 1886 Gothic melodrama. “From the creators of The Picture of Dorian Gray”. Anybody fortunate enough to have seen Williams’s startlingly innovative and brilliantly imaginative adaptation of Oscar Wilde’s The Picture of Dorian Grey as a cine-theatrical masterpiece starring Erin Jean Norvill will know what to expect from the amazing creators of that groundbreaking STC production.

However, one would be mistaken to expect the Strange Case of Dr. Jekyll and Mr.Hyde to be a sequel or imitation of Kip Williams’s previous triumph. After all Williams has been exploring, experimenting and including digital technology for some time now. One only has to cast one’s mind back to recent productions of The Resistable Rise of Arturo Ui,  or Julius Caesar to realize that the fusion of digital technology and live theatre offers a fresh and exciting approach to interpreting a playwright’s intent and a director’s vision.

Like The Picture of Dorian Gray, Williams uses the narrative approach to telling the bizarre and moralistic tale of a doctor, hurled into the dangerous and dark depths of medical experimentation and its dire consequences and discovery of the dark dual nature of the human spirit. Ewen Leslie enters the open stage in casual contemporary clothing to introduce the story. At the rear of the stage and partly obscured by a suspended screen , Matthew Backer as the lawyer Gabriel Utterson resumes the narrative. Live on stage and projected on to the screen, Leslie approaches Utterson at his desk and is seen at Utterson’s side on the screen. It is this fascinating union of live theatre and film that stretches the imagination, combining reality and illusion in magical complexity that challenges perception and demands  both intellectual and emotional response from an audience compelled to confront the moral and ethical fibre of Stevenson’s novella.

On stage throughout the telling of this absorbing tale the camera operators advance and follow the actors, merging imagery and zooming in to capture the intensity of the performance. Other stage hands move the essential setting into position – the street lamps, the door to Dr. Jekyll’s house, the laboratory, the stairway to his secret room and other locations. What evolves is a modern day magic lantern show, highly sophisticated through today’s technology and yet with the same power to arouse the curiosity and enthrall an audience. The one hour fifty minutes with no interval was over in a seeming flash. Williams and his creative team perform their magic with seamless artistry.

Leslie and Backer are superb, driving the narrative with the power of period articulation in the spirit of melodrama and mystery thrillers.. Although the initial outline of characters and circumstance appeared somewhat rushed and difficult to grasp, this initial confusion was soon clarified as the characters  clearly assumed their place in this macabre tale. Leslie gives flawless performances as he  assumes the different personalities of Dr. Jekyll, his fearful and murderous dual personality Mr Hyde, Jekyll’s friend Dr. Lanyon and Jekyll’s butler Mr. Poole. A chameleon of characterization, Leslie draws his audience into the magical realm of the willing suspension of disbelief. Backer is brilliant as the baffled and curious lawyer bent on solving the story’s mysterious riddle. Ever the realist and the sceptic, Utterson is inevitably drawn into the psychedelic  world of Jekyll’s obsession with the dark side of his nature, the duality that exists in us all and serves as a warning to all hu8mankind. In a wonderfully conceived sequence, Utterson is drawn into a fantastic world of colour and  pleasure culminating in an hilarious high kicking  drug tripping live Can Can performed by Leslie and Backer in front of the video footage of whirling flamboyant colours. 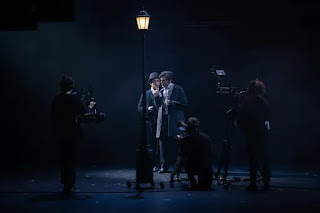 Williams is the wizard of theatrical invention. Like a great artist his style is distinctive and his intuition incisive. It is no coincidence I imagine that his genius should embrace both Stevenson’s The Strange Case of Dr. Jekyll and Mr Hyde, published in 1886 and Wilde’s The Portrait of Dorian Gray published in 1890. Freud graduated in psychoanalysis in 1885 and it is not unusual to suspect that psychological introspection was emerging as a profound science. Williams probes the inner psychological phenomenon in his production and illuminates the human psyche through his cine-theatrical imagination. Leslie and Backer embrace the style with flair and razor sharp precision, serving Williams’s vision and cinematic influences.  The intricately choreographed production is a triumph of collaboration and shared vision.

Stevenson’s moral assumes a sinister warning in the Sydney Theatre Company production of a prophetic Gothic depiction of man’s  accursed duality. In Williams’s  adaptation and under hid inspired direction the Sydney Theatre Company’s production of Strange Case of Dr Jekyll and Mr.Hyde is a riveting and revealing insight into the conflicting nature of the human psyche performed superbly by Leslie and Backer and supported by an ingenious team of collaborative creatives. This is must see theatre. Catch it if you can and must before the season ends on September 3rd. Director Kip Williams and his  company of artists have done it again!