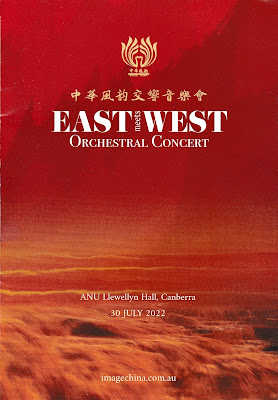 After being postponed twice due to the Covid pandemic, the “East Meets West” orchestral concert finally arrived at Llewellyn Hall.  Presented to mark the 50th anniversary of the establishment of diplomatic relations between China and Australia, it was a gala occasion with many of Canberra’s Chinese community in attendance.

Conducted by Guy Noble, the concert presented two main works by Chinese composers, “Butterfly Lovers Violin Concerto” and “The Yellow River Piano Concerto” as well as other shorter eastern and western works, some with solo singers.

The concert commenced with a nicely played “Jasmine Flowers” by Giacomo Puccini.  It was followed by “Hope Betrayed” by composer Wang Liping with soprano, Ya Fen, and mezzo soprano, Victoria Lambourn.  Jammy Huang joined the orchestra to play the Guzheng.  This instrument gave the work a hauntingly timeless quality and contrasting singing styles of the soloists added beautifully to the overall effect.

Mezzo soprano, Victoria Lambourn, then sang the Habanera from Bizet’s opera, “Carmen”.  Her singing of this famous aria in a fabulously designed red dress was seductively superb.

Next was the 1959 “Butterly Lovers Violin Concerto”, composed by He Zhanhao and Chen Gang.  Written for a Western-style orchestra, it features a solo violin played using some Chinese techniques.  Amanda Chen was the violin soloist and she gave a masterly performance of the solo passages of the work with colourful accompaniment by the orchestra.

The second half of the program commenced with a robust performance by the orchestra of Prokofiev’s Romeo and Juliet Suite No. 2.  This was followed by two songs by soprano, Sharon Zhai, with ‘Ernani…Ernani, ivolami” from Verdi’s opera, “Ernani” and the contrasting “Pamir – My Beautiful Hometown” by composer, Zheng Qiufeng.  The singer commanded the stage with her fabulous voice, singing both songs with great assurance and beauty.

The final work on the program, “The Yellow River Piano Concerto” by Yin Chengzong was played by piano soloist, Tony Lee.  This exciting dramatic work was given an excellent performance by Lee and the orchestra.

The concert concluded with an encore, “I Love You, China”, nicely sung in Chinese by the three singers.  The enthusiastic audience gave the performance well-deserved sustained applause.

An announcement at the start of the concert asking people not to use their phones might have prevented the constant photographing with phones throughout.

Photos supplied by the production

This review was first published in the Canberra CityNews digital edition of 31 July 2022.