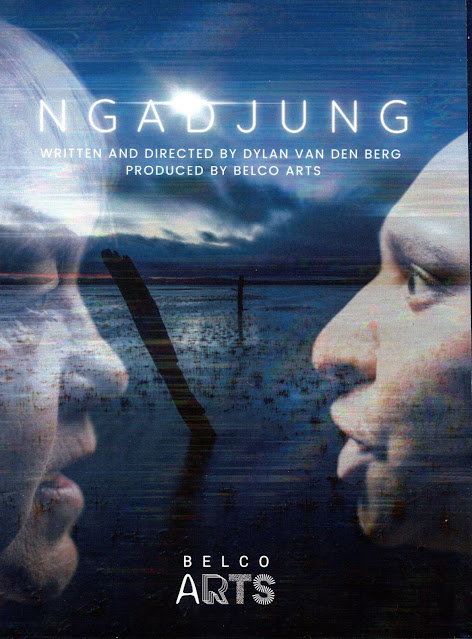 
Dylan Van Den Berg has created a new theatrical genre which I will call Fantasie Noir.  He imagines an impossible world, from a realistic point of view – seemingly a logical extension of global heating – in which there is almost no water on earth.

A giant monopoly – perhaps named WestCo or WetCo (I couldn’t be sure via my hearing aids) – still supports cities and what seemed to be a highly militaristic control operation, selling a synthetic liquid to replace water.  Two of their one-time employees have escaped their clutches and meet in a dry river bed, with rose-coloured-glasses memories of drinking real water and even going swimming.

The elder woman has half a very small bottle of real water left.  One drop revives the younger woman from death by dehydration.  They survive a smothering dust storm, massive dry lightning, and the threatening robot helicopters searching – I imagined – for renegade water miners.  Though they dig in the river bed, the women never find new water; and the elder is killed by laser from the company helicopter.

But the younger women revives the elder with one drop of real water.  They celebrate their survival once again, to end this episode of life in an entirely dystopian world.  Their relationship has shifted from paranoid mistrust and conflict to something like acceptance, recognition and respect.

The title Ngadjung is taken from the Ngunnawal word meaning water, written in phonetics as ‘ŋadyuŋ’, emphasising the importance of the First Nations history of Canberra and Australia, and their deep understanding of how we are all connected to country, integrated with all of nature.

Though the acting by Lisa Maza (the elder woman) and Kylah Day (the younger) has the strength of characters needed to play their interactions from moment to moment, the most dramatic effects are from the lighting and sound – not only of the obvious kind like frightening lightning, thunder and spotlights, and lasers from helicopters; but especially of mysterious amorphous impressionistic sounds of the spirits of the moon and the atmosphere.  Peter Bailey and Linda Buck deserve special mention for their work on this production.

This form of theatre in response to what Van Den Berg sees – “the world is falling to pieces; politically, socially, environmentally” – might be more akin to performance poetry or a musical fantasia than a conventional stage play.  It is a metaphorical fantasy of our future, and very definitely black.