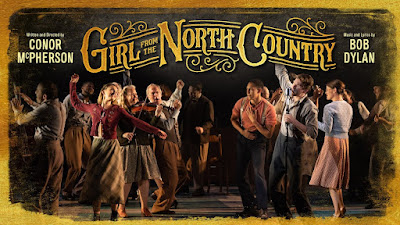 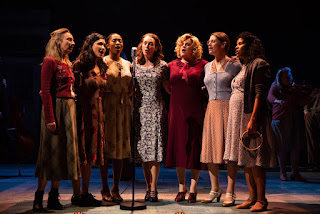 Taking its title from a Bob Dylan love song Girl from the North Country is not your conventional musical. It is a superbly staged snapshot of life during the Great Depression of 1929-41. Set in the small Upper Midwest town of Duluth in Minnesota where Dylan was born in 1941 Girl From the North Country opens a window on the lives of residents in a run-down guest house owned by gruff and growling Nick Laine (Peter Kowitz) and his wife Elizabeth (Lisa McCune),who suffers from early onset dementia. Terence Crawford as the Laines’ physician Dr Walker and the play’s mellifluous narrator sets the scene perfectly and at various times provides background information and commentary on the action and the residents. Crawford’s narration is hypnotic, conjuring the enticing atmosphere of the radio serial. Rae Smith’s scenic and costume design imbue the production with striking authenticity. While McPherson’s script encapsulates a lyrical sentiment of loss and longing in his pageant of drifters and battlers, Dylan’s songs complement the drama including songs of injustice (Hurricane),fallen fortune (Like a Rolling Stone)and hope (Pressing On).   An initial lack of articulation by the soloists in some of the early numbers might have been avoided by a more thorough pre-show technical sound check  with the standing microphone.

A series of vignettes carries the action. We are inextricably drawn into the lives of the characters. A tightly knit ensemble under Conor McPherson’s intuitive and seamless direction create wonderfully idiosyncratic performances. Members of the band dressed in the clothes of the time merge with the characters onstage and actors Christina O’Neill (Mrs. Neilson) on guitar and Helen Dallimore (Mrs. Burke) on percussion join the band members occasionally. There is a captivating unity to this brilliantly conceived and absorbingly staged production.  Each character is real, breathing life into the struggles and diverse personalities of the guest house’s occupants. Lives intertwine, relationships evolve, conflicts erupt and a community of contrasting characters coalesces at times of celebration and festivity.

The cohesive force of community soars in arranger Simon Hale’s uplifting renditions of gospel and congregational choruses. It offers a startling contrast to the drama’s darker issues. The ugly stain of racism surfaces in the taunting of falsely accused murderer and former black boxer Joe Scott (Elijah Williams). The cruel impact of encroaching dementia lends McCune’s character a powerfully moving complexity. Failed businessman Mr. Burke (Greg Stone) and his wife (Helen Dallimore) must cope with the collapse of their business and the challenge of caring for their intellectually disabled adult son Elias (Blake Erickson). Black humour marks Peter Carroll’s performance of the aging Mr. Perry, desperately seeking the solace and love of youth. The Laines’ adopted black daughter Marianne (Chemon Theys) must endure the social stigma of the pregnant black unwed mother. Dylan was born almost ten years after the period of Girl From The North Country, but his songs reverberate with timeless protest against injustice and social disadvantage.

Girl From The North Country resonates with contemporary relevance to Australian audiences, who continue to endure the impact of a global pandemic and its crippling consequences. This triumphant collaboration between Irish playwright and director McPherson and  American folk legend and Nobel Laureate Dylan presents  a contrasting portrait of human pain and human love. In the spirit of a Steinbeck novel it is also a testament to struggle and survival, to the endurance of hope and the power of resilience in the face of forces beyond one’s control. This is no musical of pleasant songs and happy endings but an uplifting and gloriously performed theatrical experience.

This review was originally published in The Canberra Times online.
Posted by Canberra Critics Circle at 9:42 PM