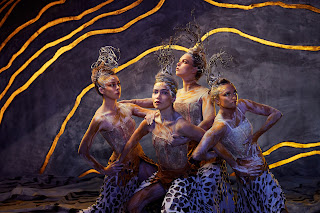 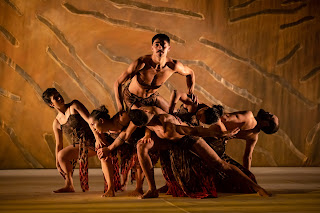 To witness Bangarra Dance Theatre is to enter a world of spirits, mystery, wonderment and the wisdom and knowledge of an ancient civilization. It is to appreciate and embrace the notion of Country and our relationship to the land, water and sky. It is to understand our connection to Nature and the responsibility we share to nurture the planet we inhabit. This is the gift that Bangarra has given us for thirty years,

In 2012, Frances Rings, a dancer and choreographer with Bangarra and the recently appointed successor to founding Artistic Director, Stephen Page, was inspired by the landscape of Lake Eyre (Kathi Tanda in the language of the Arabunna people), the world’s largest inland sea, located in northern South Australia. Ten years after its premiere season, Terrain has been revived for a national tour, including Canberra.

This hauntingly beautiful and evocatively exquisite work is presented in nine movements. I use the term movements, because Terrain washes over me like a musical composition, transforming the spirit and arousing heart and mind. Each “state of experience “ as Rings calls them depict particular features of the lake through  dance, design, music and costuming. 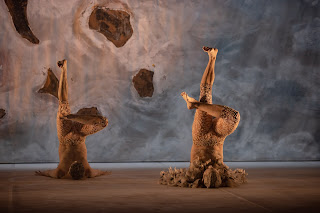 Red Brick looks beyond the urbanscape to the ancestral calling to country.  Dancers Rikki Mason, Danioel Mateo, Ryan Pearson and Jesse Murray with their feet firmly connected to the land lift Courtney Radford towards the sky and the calling. This contrasted with a powerfully choreographed Shields, recalling the warriors who have struggled against invasion and occupation to battle the oppression that through the centuries of settlement has denied them land rights, native title and the recognition of First Nation People. In the light of current political developments this state of experience holds a special significance in the dance. Reborn illuminates the tradition of lineage as customs and knowledge ar passed down from generation to generation. . Spinifex is danced by the women of the company, who represent the spirit women suspended in time. The vast salt expanse conjures the people’s connection to an ancient power in SALT. SCAR is an indictment of the abuse of land and people and the destruction by man of Nature’s delicate balance. In LANDFORM  the power of healing is depicted through the promise of regeneration. In a mesmerising and spiritually uplifting REFLECT, Lillian Banks and Ryan Pearson weave a magical dance that transcends to a sacred realm where earth and sky meet. In a final ensemble of colour and movement, the company fills the stage with the flow of waters to the lake in DELUGE. It is the symbol of regeneration and transformation promising the gift of life’s wondrous cycle. It is the dance of hope and promise, as significant and as optimistic as it was when Rings conceived the work a decade ago. 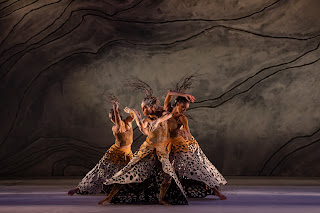 As I watch the familiar patterns of the dancers’ embrace of classical and contemporary choreography, I am filled with a hope that reconciliation and the righting of the wrongs may be realized in a foreseeable future. The enshrining of a First Nations Voice in the Constitution is an important step in that process and Bangarra Dance Theatre ‘s mission plays an important part in that process through their magnificent performances

Ten years on Terrain retains a simplicity, a fluid and expressive ebb and flow combining classical technique with contemporary dynamism and thrilling choreography. Recent works by Bangarra such as Wudjang- Not the Past are layered with a sophisticated collaboration that denotes the company’s growth and development.  I make this as an observation, not a comparison, and Terrain in its artistry and execution is a visual, aural and emotive delight to savour and reflect on. Terrain is a timely and portentious work of great artistry and significant purpose.

To see Terrain is to experience respect for the past and hope for the future. As with all of Bangarra’s work over the past thirty years, Terrain is a gift to the Nation.