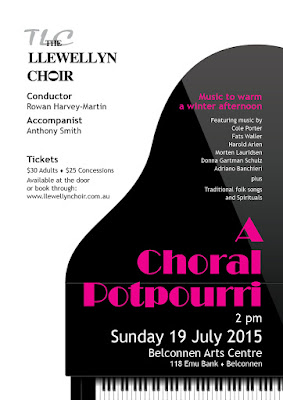 ‘There is no theme to this concert,’ warned conductor, Rowan Harvey-Martin, ‘except what I found in my music cupboard’.  She has a pretty interesting cupboard, judging by the variety of music performed by the Llewellyn Choir at the Belconnen Arts Centre.

The Llewellyn Choir was founded in 1980.  It was originally named the School of Music Community Choir but was renamed in 1990 in honour of the founding Director of the Canberra School of Music, Ernest Llewellyn.  The choir performs several concerts each year.

Intriguingly, we had been promised animal sounds at this concert.  The choir commenced with the 17th Century ‘Contrappunto Bestiale Alla Mente’ by Adriano Banchieri, an amusing work in Latin and Animal.  It was followed by ‘The Three Ravens’, an English folk ballad published in the 17th Century.  From there the selection ranged from Swedish works, some sea shanties, British traditional songs, American show tunes and two versions of ‘Sure On This Shining Night’.

The choir’s performance of Swede, Hugo Alfven’s 1942 ‘Aftonen’, (Evening) set to a poem by Herman Sätherberg – a brooding, atmospheric piece - was particularly impressive.  The sea shanties, ‘The Drunken Sailor’ and ‘The Arethusa’ saw the choir at its most relaxed, clearly enjoying the rousing spirit of both songs.  Amongst the British songs, ‘The Banks o’ Doon’, based on a poem by Robert Burns with a new melody by American, Donna Schultz, was nicely sung with an unexpected, but beautifully played, accompaniment by Rowan Harvey-Martin on violin.  Fats Waller’s ‘Ain’t Misbehavin’’ was presented in a great arrangement that showcased the full range and colour of the choir’s voices.

Apart from some occasional wavering in the harmonies and a few unconfident-sounding entries, this was a very enjoyable concert.  Conductor, Rowan Harvey-Martin, obtained great results from the choir and Sue Reid provided an excellent piano accompaniment.  A magnificent afternoon tea provided by the choir members was a perfect end to a memorable concert.

Len Power’s reviews are also broadcast in the ‘Artcetera’ program on Artsound FM 92.7 on Saturdays from 9am.
Posted by Canberra Critics Circle at 8:44 AM