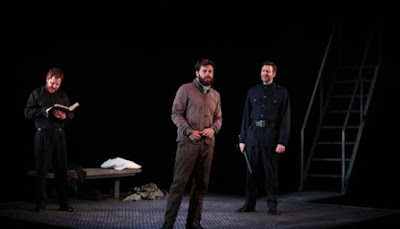 "I am this fucking country!" Ned Kelly is Australia’s luckiest bandit, a thief and murderer who sneaked into national mythology as a quasi-heroic knight in armour. Playwright Matthew Ryan strips the myth and armour from this icon, not shirking from either his heroic or villainous aspects.

Kelly is set on the eve of the bushranger’s execution. Ned Kelly (Steven Rooke) has accepted that he is to die, glorying in his celebrity and passing the time with venomous jibes at his jailor (Anthony Standish). Kelly is a trapped animal, limping from bullet wounds and struggling to break his iron manacles. His one - justified - fear is that his body will be mutilated after he dies.

A boyish priest (Kevin Spink) comes to comfort Kelly and receive his confession, but is quickly revealed to be Dan Kelly - Ned’s younger brother, who in Australian folklore survived the siege at Glenrowan to live out the rest of his life in Queensland. Dan has slipped into the jail in disguise to seek Ned’s blessing to start a new life free of the Kelly name and legacy. Ned is grateful to see his younger brother alive, but their bartering over the terms of this blessing opens bitter wounds. Finally Ned presents his brother with a stark choice: help him escape, or die here with him.

Rooke’s Kelly is quasi-poetic, searching for eloquence but always tripping over his own nastiness. Kelly feels like a villain, but Ryan’s script is determined to give the devil his due. His family were abused by the police, his murders were often (but not always) out of necessity, and theft was the only way of surviving. Dan tries to argue against his brother’s self-serving interpretation of events, but is too dominated by his brother to make much of a showing. But when Kelly starts painting himself as a revolutionary, his bombast begins to implode: not even Ned can claim it was all worth the innocent blood on his hands.

Kelly is an immersive and gripping drama. Ryan’s plotting is captivating, driven by a firework chain of explosive plot twists. The acting is rough and physical, perfectly capturing the violence in the lives of the characters. The central preoccupation of the play is whether Kelly is in fact a hero or a villain - "delusional thug" would be more accurate. Well-crafted and engaging deeply with the truth behind one of Australia’s greatest icons, Kelly is a must-see.