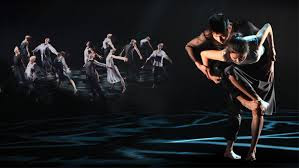 Following closely on the recent earthquakes in Nepal, this haunting collaboration between the Leshan Dance Company of South China, and New Zealand choreographer, Sara Brodie, is a deeply moving response to two other horrific earthquakes.

Leshan is approximately 120 kilometres from the city of Chengdu in the province of Sichuan, which in 2008 was struck by a devastating earthquake. More than half the dancers appearing in “Fault Lines” have lost either friends or family in this earthquake which claimed the lives of more than 70,000 of their countrymen.

Two years later, Christchurch suffered a similar disaster in which choreographer, Sara Brodie, found herself an unwilling participant.  Although the loss of life in Christchurch was nowhere near as overwhelming, the feelings and emotions were no different. 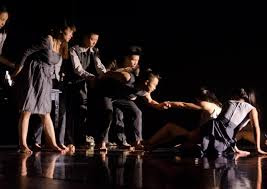 Premiered at the Melbourne Arts Festival in 2012, “Fault Lines” has since been performed in China, Montreal and New Zealand. Canberra was fortunate to get the opportunity to experience this production during this current Australian tour.

More dance theatre than pure contemporary dance,”Fault Lines” is an elegiac work which wisely concentrates on the human and emotional responses rather than attempting to recreate the actual events. Although conceived as an ensemble piece, the work provides plenty of opportunities for Leshan’s attractive, young dancers to display their individual artistry and impeccable contemporary dance training.

Mark Macintyre has designed an appropriately sombre black draped setting, which features a cyclorama on to which is projected images detailing sobering statistics about earthquakes which have occurred in the astonishing number of cities around the world which have been built on fault lines. This setting provides an excellent environment for a series of compelling abstract set pieces which strongly evoke the shared earthquake experiences of the dancers, who are costumed in a variety of attractive individual, contemporary fashions, rendered in soft muted greys. 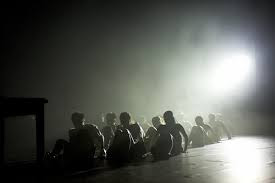 Memorable among them were the abstract representation of a bustling city where workers go about their business blissfully engaged with their cell-phones rather than with those surrounding them; the uneasy feeling of foreboding; the plight of a group warily edging feet-first towards rescue; the disorientated party girl hobbling on her single high heel; the crowd being held back by tapes; others using the light from their cell-phones to find their way towards rescue.

A hauntingly beautiful creation, “Fault Lines” succeeds beautifully as a dance work, and as  a compelling piece of theatre,  in capturing the often contradictory way in which humans cope with events outside their control.