AT LAST - THE ETTA JAMES STORY

Vika Bull and The Essential R & B Band 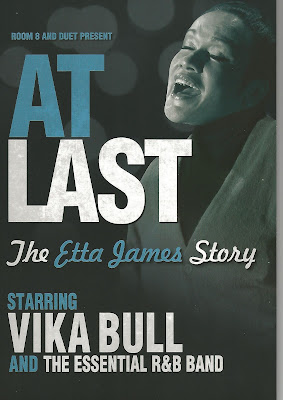 Some people are born to sing. Etta James was one, Vika Bull another. Black American blues singer, Etta James, had a long and tumultuous career, during which she won six Grammy Awards and a star on The Hollywood Walk of Fame.  James is credited as being one of the first to bridge the gap between rhythm & blues, rock & roll and pop, and there can be few who have not heard a recording of her signature song “At Last”.

Vika Bull’s pathway to fame has been has been quite different. As one half of the sister act, Vika & Linda, Bull has maintained a successful career since the 1980’s, both as a recording artist and backing singer to some country’s finest performers including Paul Kelly, John Farnham, Tim Finn and The Black Sorrows, as well as overseas artists of the calibre of Bob Dylan, Billy Joel, Sting and Joe Cocker.

Although she professes to being most comfortable singing harmonies up the back, the choice of Vika Bull for this excellent tribute show about Etta James is nothing less than inspired. It matters little that she bears  only a passing physical resemblance to James, because Vika Bull’s own charming, self-effacing, stage presence and her astonishing ability to reach right into the heart of each  song and transform and illuminate it with her own finely honed vocal and stagecraft abilities, allows her to pay tribute to James, without resorting to imitation.

The show itself follows the well-trodden formula of running through the details of Etta James life, punctuated by songs most associated with her career.  “W.O.M.A.N.”, “It’s a Man’s Man’s World”, “Take It To The Limit”, and of course, “At Last”, are all included and brilliantly performed by Bull and her band.  Bull’s truly sensational heart-wrenching performance of “I’d Rather Go Blind” earned her the first of several standing ovations during the performance from the capacity audience.

This is a class show. The musical arrangements are superb, and given stunning treatment by the seven-piece Essential R & B Band. John H. Livings narration is candid, informative and thankfully avoids sensationalising the more unsavoury aspects of James’s life. It is delivered by Bull, trumpeter Tibor Gyapjas and on occasion, other members of the band, with warmth and sincerity.

Careful attention to stage placement throughout the performance, an attractive back-drop featuring a slowly receding cityscape, together with the well-designed lighting and sound plot, pointed to a strong directorial hand. Not even some missed sound cues caused by an inattentive sound technician at the beginning of the show could dint the polish.

In fact the way both Bull and Gyapjas coped, by calmly repeating the cues, rather than rushing on, highlighted the impressive attention to detail lavished on this production.

But as satisfying and interesting as it is as tribute to a great bygone singer, “At Last – The Etta James Story” is memorable for the thrilling showcase it provides for the extraordinary talents of another outstanding singer who is very much with us. We look forward with much anticipation to “At Last – The Vika Bull Story”.